In April 2021, the Olds College Centre for Innovation, which oversees research programs taking place at Olds College in Olds Alberta, let us know they were planning to ‘wind down the Prairie Turfgrass Research Centre moniker’.

What did that mean exactly?  The departure of Dr. Chavarria from PTRC, and Katie Dodson not long before, triggered OCCI’s review of the future of turfgrass research at Old College with the oversight group concluding they could no longer support dedicated turf research in its present form.

In an email to Jim Ross of the CTRF, Joy Agnew, Associate VP, Applied Research, stated, “While support and interest from industry, ATRF and CTRF remains strong, there is not a strong enough case to recruit and hire a qualified research scientist with a specific focus on turfgrass.”

In support of continued turfgrass research at Olds, the CTRF responded by asking, “If there is not a strong enough case to recruit and hire a qualified research scientist with a specific focus on turfgrass, assuming this means a PhD, has OCCI considered the potential of PTRC’s previous business model that did not include someone in this role?

In June, we received an email from Jason Pick, Olds College turfgrass instructor and Executive Director of the Alberta Turfgrass Research Foundation saying, “Just wanted to let you know, the impact of your message to Joy and OCCI was significant - it has prompted a renewal of the PTRC.  The CTRF/your efforts to communicate the needs of industry, was very well received - and the college has responded positively.  On behalf of Mark [Anderson] and I, thank you for your huge part in keeping turf research alive at Olds College!!!” 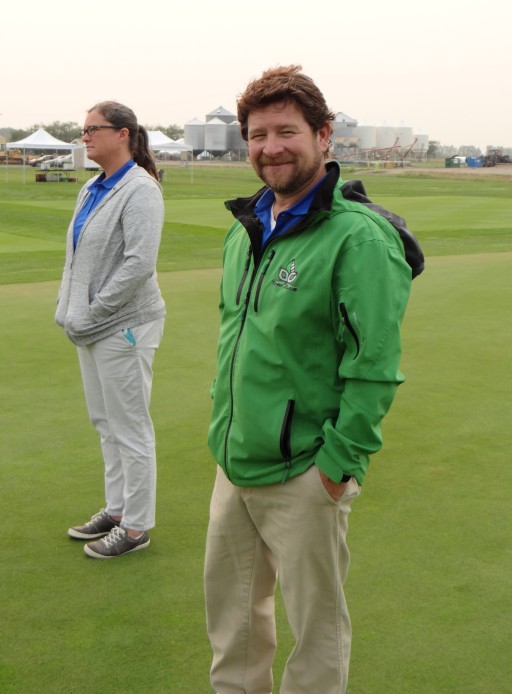 Jason Pick, ATRF Executive Director and Olds College Turf Management Instructor. That's his wife Krista in the background who helps out at the turf research plots.

Details are to be worked out but the plan under Pick’s leadership, is the PTRC will revert back to the original fee-for-service model created by long-time PTRC Director, Jim Ross, a model that produced world-class and often industry altering research on its own and through collaboration with other institutions.

About the CTRF
The Canadian Turfgrass Research Foundation (CTRF) is a registered charity that raises funds for turfgrass research projects aimed at advancing education and scientific knowledge associated with the safe, recreational and functional use of turfgrass.