It is well known that rolling can reduce dollar spot (fungal disease caused by Clarireedia spp.). It is less known that it can have a preventative effect on microdochium patch (formerly called fusarium/pink snow mold, caused by the fungus Microdochium nivale), but experiments at Copenhagen Golf Club and research at NIBIO Landvik suggests it. 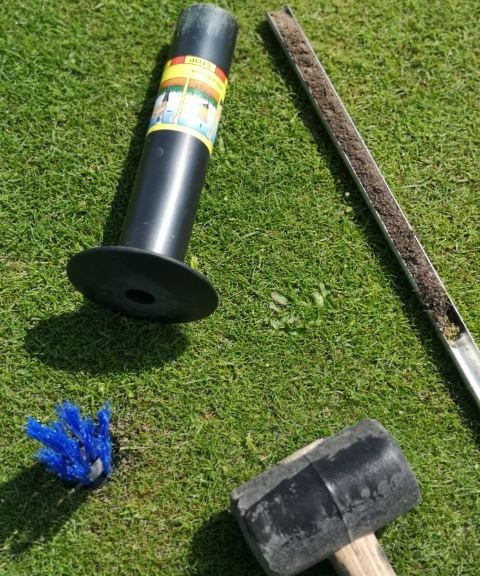 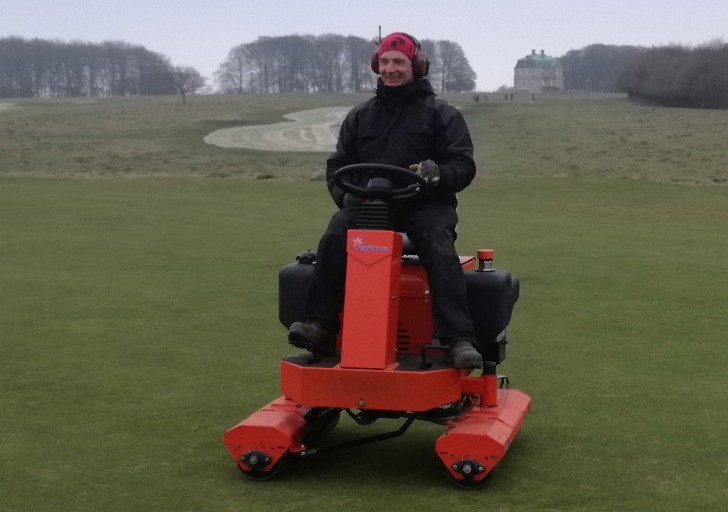 The preliminary results from the first trial year show that rolling reduced mi- crodochium patch on the green in Co- penhagen GK, while the results from Landvik showed the same tendency.  Both trials will continue in 2021.

Rolling to reduce fungal diseases
Several experiments have shown that regular use of rolling during the growing season can reduce dollar spot (2,3). Because it also has an effect against anthracnose, the University of Oregon tested rolling against microdochium patch on an annual bluegrass green in 2013-15 (4). The greens were rolled five times a week, and it reduced the attacks by 47% the first year and 75% the second year. Despite the reduction in microdochium patch, the conclusion was that rolling alone was not enough to achieve a satisfactory quality of these annual bluegrass greens.

The experiment at Copenhagen GC
At Copenhagen GC timing and frequency of rolling were examined. The green was divided into 2 x 12 m plots, marked with blue, red and yellow markers, so the greenkeeper could distinguish where and how often they should do the rolling (Photo 1, left).

There were 3 replicates of the different rolling treatments which were: zero, two and four times per week. In one half of the green, rolling started in June 2020, while the rest of the green was rolled from August. Treatments ended in late November.

Course manager Martin Nilsson did monthly registrations of overall turfgrass quality (scale from 1 to 9, where 1 was the worst and 9 was the best) and % of microdochium patch in 1 m2 observation plots from June to November. Total N supply was 0.5 kg per 100 m2 in 2020. 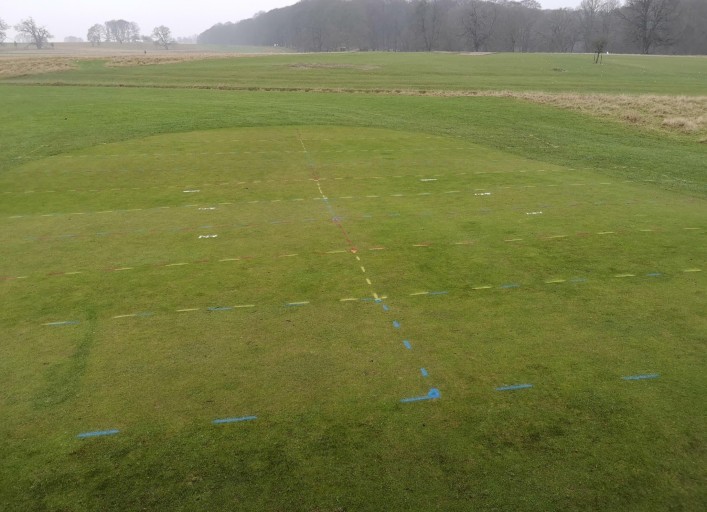 Difference between rolling 2 and 4 times per week was not significant. However, by the assessment in December, Martin Nilsson noticed that the plots rolled 4 times per week looked less dense and more worn than the plots rolled twice per week. Control plots (no rolling) looked greener and healthier from a distance in December, but that was due to more moss in these plots (Photo 3).

Photo 4: Less microdochium patch on 15th October 2020 on a plot that was rolled twice a week from the end of September compared with untreated control. Photo: Tatsiana Espevig.

The experiment at NIBIO Landvik
The trial at Landvik is part of a larger trial in which various alternative methods against microdochium patch are tested. Here we refer to the results only from fertilizer treatments in combination with rolling. The experiment was performed on two USGA experimental greens with annual bluegrass. A Smithco greens roller was used from the end of September to the end of October 2020. The greens were established with annual bluegrass in spring 2019 with core material from Borregaard GC, Norway. Annual bluegrass is used in these experiments because this grass species is prone to microdochium patch or anthracnose diseases.

Experimental plots were fertilized with two nitrogen levels from April to October: a total of 2.8 kg N per 100 m2 (control) and 2.1 kg N per 100 m2. Treatment plots were 1,5 x 2 m in size and assessment plots were 1 x 1,5 m. The experiment was performed with 4 repetitions (2 repetitions on each green). Preliminary results show that the lower N level almost halved microdochium patch, but increased anthracnose 1,5 times (Table 2).

On plots that were rolled, there was less microdochium patch in October (Photo 4 and Table 2) but significant differences between untreated plots and rolled plots disappeared during the autumn.

Preliminary recommendation
Rolling seems to reduce microdochium patch on annual bluegrass and fescue/bentgrass greens. Rolling four times a week did not give a better effect than rolling twice, and wear from four times rolling gave reduced green quality in late autumn on the green at Copenhagen GC. Rolling has a positive effect on green quality throughout the summer, but to reduce microdochium patch, it seems that rolling twice a week from August is sufficient for a good control. It is also worth noting that reduced nitrogen fertilisation in the autumn resulted in less microdochium patch on annual bluegrass greens, as has been shown in previous experiments with autumn fertilization (5).

The experiments will continue in 2021 with observations in the spring of 2021 and 2022, and here it will be interesting to see if the preliminary results are confirmed.

We thank Agnar Kvalbein for professional advice during the work on this article.