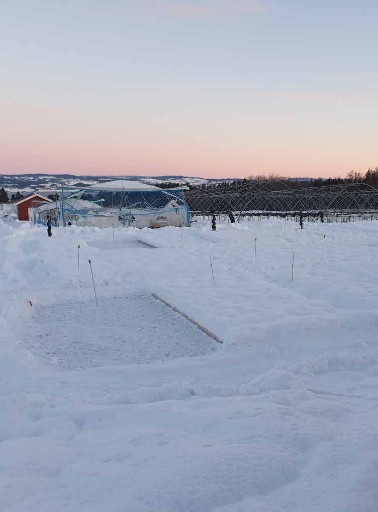 Photo 1. The experimental green at Apelsvoll on 25 Nov. 2020, ready for the winter.The plots going to be covered by ice were surrounded by frames to keep the freezing water in place.The white poles extended 50 cm into  the rootzone and contained tubes filled with the methylene- blue, a pigment that turns white at freezing temperatures and can be used to measure freezing depth in the soil.The black bags on wooden poles contained senders for the temperature and gas sensors than were deployed in the thatch/mat layer in treatments 1, 3 and 4.  hoto:Trygve S. Aamlid

Figure 1 shows the field map. The experiment had three blocks, the three species being established in stripes in one direction with experimental treatments in stripes perpendicular to the species. The experimental treatments were:
1. Control = Natural winter: No removal of snow or ice. Natural snow and ice melt in spring
2. Snow and ice removal: Snow deeper than 5 cm and all ice layers consistently removed from the green surface throughout the winter
3. Long-lasting ice cover: Establishment of a 10 cm ice layer in the first period with freezing tempera- tures in late November. Ice protected from melting using styrofoam mats during mild periods with no snow above the ice layer before 1 April. Natural snow and ice melt after 1 April.
4. As treatment 3, but with a transpa- rent, impermeable, plastic sheet, thickness 115 my (SLIP AB, Söderbärke, Sweden) between the turf and the ice. No ventilation under the plastic sheets.
5. As treatment 2 (snow and ice removal) until 11 January. Then establishment of a 10 cm ice layer and as treatment 3 for the rest of the winter.
6. As treatment 3, but mechanical removal snow and ice in the first mild period after 1 March when the ice slips form the turf. Protection against night frost with a permeable spring tarp after snow and ice removal.

The field map is shown in Figure 1, while Photo 1 shows the experiment on 25 November, ready for the winter. 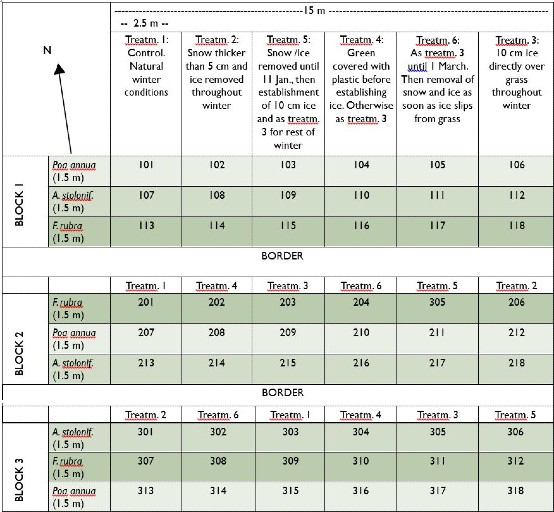 Figure 1. Field map of the ICE-BREAKER experiment at Apelsvoll. Each block (replicate) had stripes with creeping bentgrass, red fescue and annual bluegrass in one direction and the different treatments in the other direction. Plot number is shown in the upper left corner of each cell.

Weather conditions and the establishment of ice cover
The fall in 2020 was very mild com pared with the long-term (1991-2020) average for Apelsvoll Research Center (Figure 2). October and December 2020 also had abundant rainfall. The plastic sheets in treatment 4 were installed on 30 November after a cold spell with frost in the 1-2 cm surface layer on the green; on the same day we also tried to establish ice cover in treatments 3, 4 and 6 by repeatedly adding with small amounts of wa ter. However, the mild weather soon returned causing the ice to become slushy and in many cases melt to tally with the melting water seeping through the mostly unfrozen rootzone. 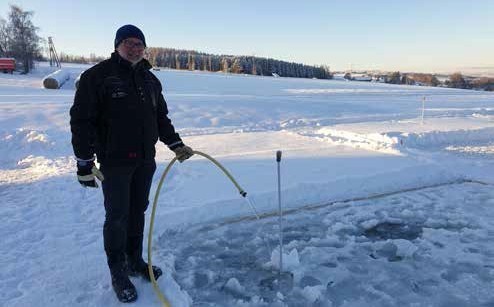 Photo 2. Research technician Jan Tangsveen establishing ice cover in treatment 3 on 5 January 2021. Attempts to establish ice were made for the first time on 30 November and repeated several times in December, but the mild weather resulted in the formation of slush and no compact ice. On 5 January the winter had finally settled, but the ice layers in treatments 3, 4 and 6 became rather porous because of the slush that was already present on the plots. Photo: Marte Skattebu. 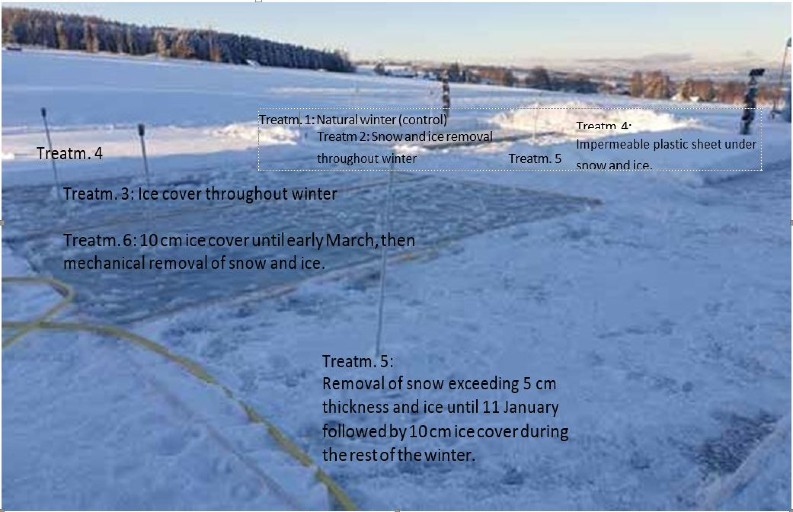 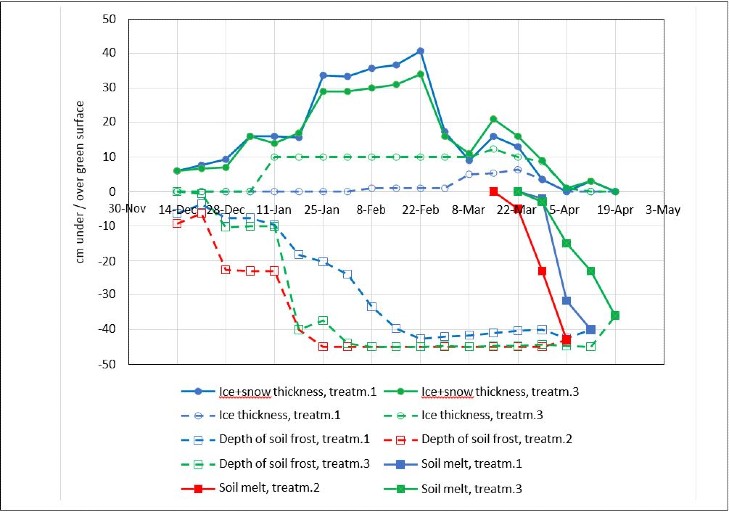 Figure 3. Snow and ice thickness, depth of soil frost and melting from the surface in March/April in treatment 1 (natural snow and ice cover), 2 (snow and ice removed throughout winter) and 3 (man-made ice cover, 10 cm thick). Snow thickness in treatment 2 is not shown as the snow was always removed as soon as it exceeded 5 cm. Data from treatments 5 and 6 are also not shown in order not to overload the figure. Tubes for measurement of soil frost (Photo 1) were not installed in treatment 4 in order to perforate the plastic.

Snow depth, ice thickness and soil frost during winter
Figure 3 shows results from weekly measurements of snow depth, ice thickness and soil frost in treatments 1, 2 and 3. Because of the mild temperatures, only the top 5 cm of the rootzone was frozen until 21 December. After that soil frost penetrated to approximately 20 cm depth in treatment 2 where the snow was removed but only to 8-10 cm in treatment 1  that was covered with 10-15 cm snow. After successfully establishing ice on 5 January, the frost rapidly penetrated deeper in treatment 3 but needed longer time to penetrate to the same depth on the plots which were covered by snow. The take-home message from this is that an ice layer, unlike a snow layer, does not provide any in- sulation against low freezing temperatures. However, during this particular winter, long periods with minimum air temperatures below -15°C in January and February caused frost to penetrate deeper and deeper into the green despite snow depth eventually reaching a maximal thickness of 40 cm. At the most, the soil was frozen to 40-45 cm depth, i.e. well into the indigenous moraine soil under the green.

On 22 February the weather turned mild for about one week (Figure 3). There was no precipitation, but the snow started to collapse because of air temperatures above zero, even during night. During this period, a porous ice layer accumulated to a thickness of about 7 cm in the control treatment with natural winter (treatment 1).  The protocol for treatment 6 prescribed mechanical snow and ice removal during the first mild period in March, ‘as soon as the ice slips from the grass’. This had perhaps been possible in the last week of February, but on 2 March, cold weather returned with night temperatures down to -5°C and day temperatures barely above zero. The snow was removed in treatment  6 on 12 March, but we did not start chopping ice until 18 March as the grass were still tightly encapsulated in ice. Not until Easter week (30  March) were the plots in treatment 6 sufficiently bare from ice and melting water that the spring cover, a performated white tarp from the Norwegian company Norgro, could be laid out.  The plots in treatment 2 were covered on the same date while the plots in the other treatments had to wait for one more week for all snow and ice to disappear. The plastic in treatment 4 was removed on 6 April, and the spring tarps in treatments 1, 3, 4 and 5 installed three days later. In treatment 3 and 5 that had been covered by a compact ice layer since 11 January, the soil at 30 to 40 cm depth remained frozen until 19 April (Figure 3).

The green always melted from the surface, with virtually no melting from the bottom of the profile.

Results
The experiment produced huge amounts of data, many of which still remain to be analyzed. This is particularly the case with the data from the temperature, oxygen and CO2 loggers that were deployed in the thatch/mat layer in treatments 1, 3 and 4 in all species. We also have not yet analyzed the data for freezing tolerance and regrowth of samples taken to the greenhouse during the trial. These data will be helpful for the interpretation of winter survival in the various treatments. The experiment will also be repeated one more winter to create a stronger basis for scientific and practical conclusions. 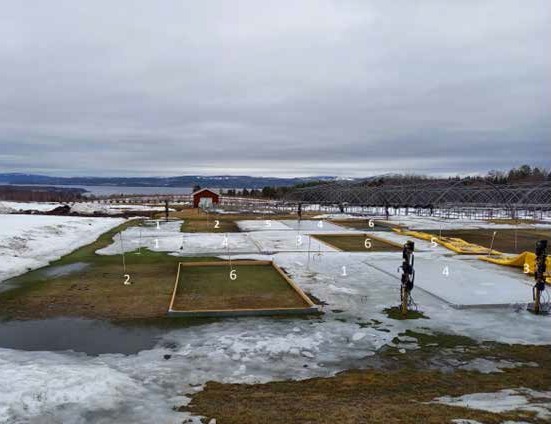 Photo 4. The experiment in Easter week, Monday 29 March; figures indicate treatment number.The plots in treatments 2 and 6 (no snow or ice) were covered with the spring tarp on 30 March. In the other treatments, the spring tarps had to wait until 9 April, after natural ice and snow melt.Yellow styrofoam mats that were used to prevent ice melt before 1 April in treatments 3, 4 and 5 can be seen to the right. Photo: Marte Skattebu.

Figure 4. Winter survival of creeping bentgrass, red fescue and annual bluegrass in treatments 1-6. Results from assessments on 5 May 2021.

Significantly better winter survival under plastic sheets
Despite these reservations, there is no doubt that the plastic covers in treatment 4 produced the best winter survival of all grass species (Figure 4, Photos 5 and 6). Figure 4 shows that the difference between treatment 4 and treatment 3, which had the same ice cover but no plastic between the turf and the ice, was highly significant in creeping bentgrass, red fescue and annual bluegrass, whilst the difference between the control treatment (treatment 1: natural winter) and treatment 4 was significant in annual bluegrass and showed a similar tendency in creeping bentgrass.

These results confirm three years’ positive experiences with impermeable plastic covers at Haga, Bærum, Asker and Holtsmark GC, all situated in the greater Oslo area. What is perhaps most surprising is that the plastic-covered greens survived so well despite oxygen-sensors showing concentrations down to 2-5 % in the absence of a ventilation system under the covers. There was no bad smell when the plastic was removed after 97 days’ coverage. 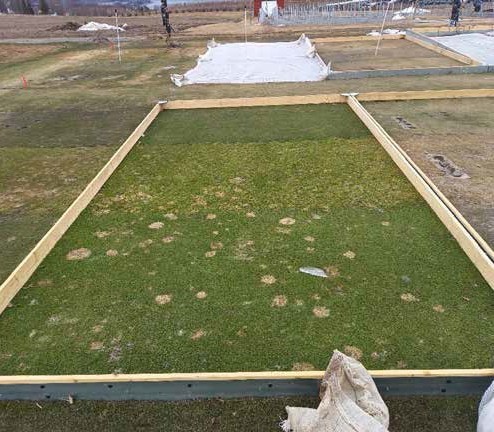 Photo 5. Good winter survival of red fescue (upper subplot), annual bluegrass (central subplot) and creeping bentgrass (nearest subplot) on a plot that had been protected with an impermeable plastic barrier between the turf and the 10 cm ice layer. The main plot to the left of the frame was treatment 1 (natural winter conditions) and the main plot to the right was treatment 3 (ice cover in direct contact with the turf. Photo taken on 7 April 2021, the day after removal of the plastic sheets. Photo: Marte Skattebu.

Damage from diseases
The only visible damage at the remo- val of the plastic in treatment 4 was microdocium patch (Microdochoum nivale) in creeping bentgrass and to a lesser extent in annual bluegrass (Photo 5).

The patches had developed under the covers despite the fact that the green had been sprayed with Delaro SC 325 (prothioconazole + trifloxystrobin, 175 + 150 g a.i./ha) around 1 October and Medallion TL (fludioxonil, 375 g a.i./ ha) after mowing had been disconti- nued in late October. These observations may also be interpreted in the light of observations at Haga, Bærum, Asker and Holtsmark golf courses showing more microdochium patch on covered creeping bentgrass greens with than without ventilation pipes installed under the plastic sheets.

The results suggest that the oxygen level under the plastic had not been not been low enough to inhibit disease development, and a question for further research is therefore if there is possible to target an oxygen concentration or O2/CO2 ratio that inhibits microdochium development without being harmful to the grass.

Another reason why no oxygen deficiency occurred in this trial may also have been that the experiment was laid out on a young green with little thatch and therefore little microbial activity that may otherwise compete with the grass for oxygen and contribute to the accumulation of CO or other toxic gases.

Ice or plastic?
The far better winter survival in tre- atment 4 than in treatments 3, 5 and 6 (which did not have plastic between the ice and the green surface) brings up the question if other causes than oxygen deprivation or the accumulation of toxic gases are critical for turfgrass survival under ice vs. plastic covers.

One likely explanation is that coverage with plastic from 30 Nov. resulted in a lower water content in green profile, and particularly in the thatch/ may layer, at the onset of low freezing temperatures in January.

Another noteworthy observation is the importance of ice compactness / density for turfgrass survival: Figure 4 shows that, especially in red fescue, the porous ice created by adding water to an existing slush layer on 5 January (treatment 3) was far less harmful than the more compact ice created by repeated applications of small amounts of water on a deeply frozen green on 11 January. 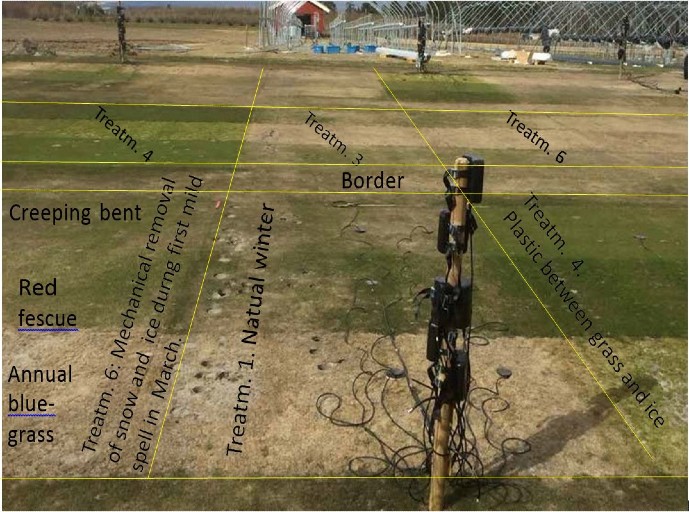 Photo 6. From the experiment at Apelsvoll on 23 April.

Perhaps there are other issues , e.g. a slower recovery after ice damage, that speaks in the disfavor or red fescue and has caused its reputation as less winter-hardy species?

This is an aspect that we will return to in coming articles from the ICE- BREAKER-project.