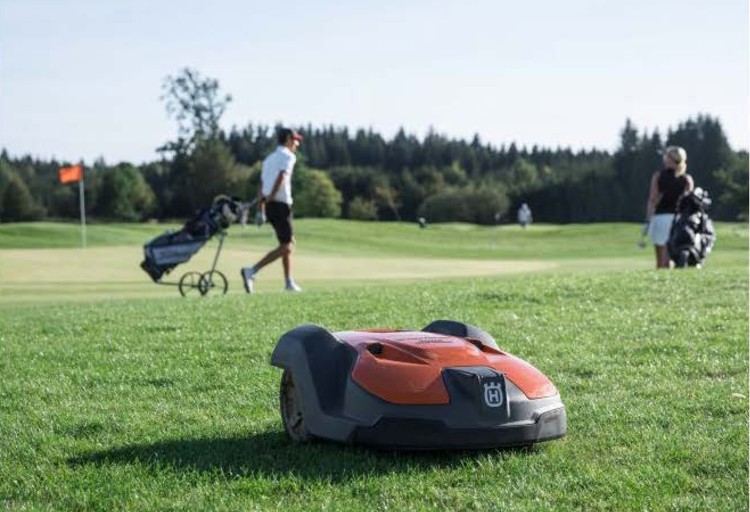 The R&D project ‘ROBO-GOLF: Robotic mowers for better turf quality, reduced fertilizer cost and less use of fossile energy on golf course fairways and semi-roughs’ was initiated by Norwegian Institute for Bioeconomy Research (NIBIO), Husqvarna AB and one golf course in each of the five Nordic countries in 2019.  The project received funding from the Scandinavian Turfgrass and Environment Research Foundation (STERF) in January 2020.

The use of light-weight robotic mowers in private and public gardens and parks has escalated during the past decade, but golf courses have mostly been slow in adopting this new technology.  Among the reasons for the reluctance to install robotic mowers are that golfers fear that they will interfere with play by damaging balls or altering ball positions, and that greenkeepers perceive robotic mowers as a threat to their jobs.

Furthermore, the scientific literature contains very little documentation about the effect of robotic mowing on turfgrass quality.  Exceptions to this is are a one-year documentation of the performance of the robotic mower Bigmow from Belrobotics on a football pitch (mowing height 25 mm) at the Sport Turf Research Institute, UK (Ferguson & Newell 2010) and research conducted by an Italian group on a semi-rough seeded with tall fescue (Festuca arundinacea) (Grossi et al. 2016, Pirchio et al. 2018a) and on a fairway seeded with manilagrass (Zoysia matrella) (Pirchio et al. 2018b).

These studies found that plots mowed with robotic mowers had better turfgrass quality, higher tiller density and finer turfgrass leaves compared with control plots maintained with a manual rotary mower in the semi-rough trial and with a manual triplex cylinder (reel) mowers in the trials of fairways and football pitches.

The relevance of the Italian research for Nordic conditions is, however, limited as neither tall fescue nor manilagrass is used on Nordic golf courses.  To the best of our knowledge, no information is available on the effect of robotic mowers in pure stands or mixtures of red fescue (Festuca rubra), Kentucky bluegrass (Poa pratensis), perennial ryegrass (Lolium perenne), or colonial bentgrass (Agrostis capillaris); the species most commonly seeded on roughs or fairways in northern environments.

Demonstration trials were established in spring 2020 on the five golf courses: Bærheim (Norway), Grenå (Denmark), Jönköping (Sweden), Ness (Iceland) and Ikaalisten (Finland). On each course, two neighbor fairways and semi-rough areas of similar size, shape and soil type were selected – one area for robotic mowing and one area for manual mowing (control). On each golf course Husqvarna installed two robotic mowers (model 550), one for the designated fairway and one for the designated semi-rough.

Results from the first year showed few differences in turfgrass quality between robotic-mowed and manually mowed fairways on the five courses.  At Ness, and to a lesser extent at Bærheim, there was a ‘tendency’ to better turfgrass quality on fairway with robotic mowing in the beginning of the season, but the opposite situation at the end of the season.

The lower ratings on the robotic-mowed plots in October was commented by the course manager at Ness:  “I don't know if it was because my mower went out under frosty conditions, or that it has been working too much once the grass growth slowed down... or both.  But it was evident that the automown area looked a lot more worn out than the reel mowed area that was being mowed once a week at the time of the latest rating. We have now stopped mowing”.

At Grenå and Ikaalisten, the robotic mown plots were slightly better than the manually mowed plots most of the season, but hardly any significant differences were found.  At Jönköping there were no differences, except for the observation in August where the cylinder-mowed fairway plots were better.  This could be explained by the missing ‘cutting lines’ on the robotic mowed fairway.

Another observation from the course manager at Jönköping was that the robotic mowed turfgrass is ‘standing up’ more than the cylinder mowed turfgrass where the rollers on the cylinder mower ‘lay down’ the grass.  When the grass is ‘standing up’ the ball has a tendency to ‘lay in’ the grass instead of ‘laying on’ the grass.  This can be a disadvantage especially for low handicap players who take advantage of no grass between the club and the ball.

The mowing height is also an important factor as the mowing height on the fairway varied from 12 to 15 mm on the different courses.  Though there were hardly any differences in turfgrass quality between the robotic and the manually mowed fairway plots, the course manager at Ness stated: “There isn't much quality difference, but I just love how consistent the fairway looks on the robomow side”.

In a reference group meeting in March 2021 the course managers agreed that the advantage of robotic relative to manual mowing was bigger on semi-rough than on fairway. While the three assessment plots in each experimental area may have been too small or too few to show this difference, it was a general impression that the robotic mowers produced less wear on the grass than the heavy rotary mowers, especially under wet conditions in the autumn.  Less grass clippings compared to rotary mowing was another observation that was not reflected by the plot assessments.

Broadleaved weeds were found in the plots at Grenå, Ness and Jönköping.  The results from these three courses showed no differences between robotic and manually mowed plots on fairway, and only an insignificant trend on semi-rough.

In the beginning of July, the course manager at Ness observed that the robotic mowed fairway had less seed heads of annual bluegrass than the cylinder-mowed fairway (photo below).  This observation has to be confirmed in 2021 and 2022. 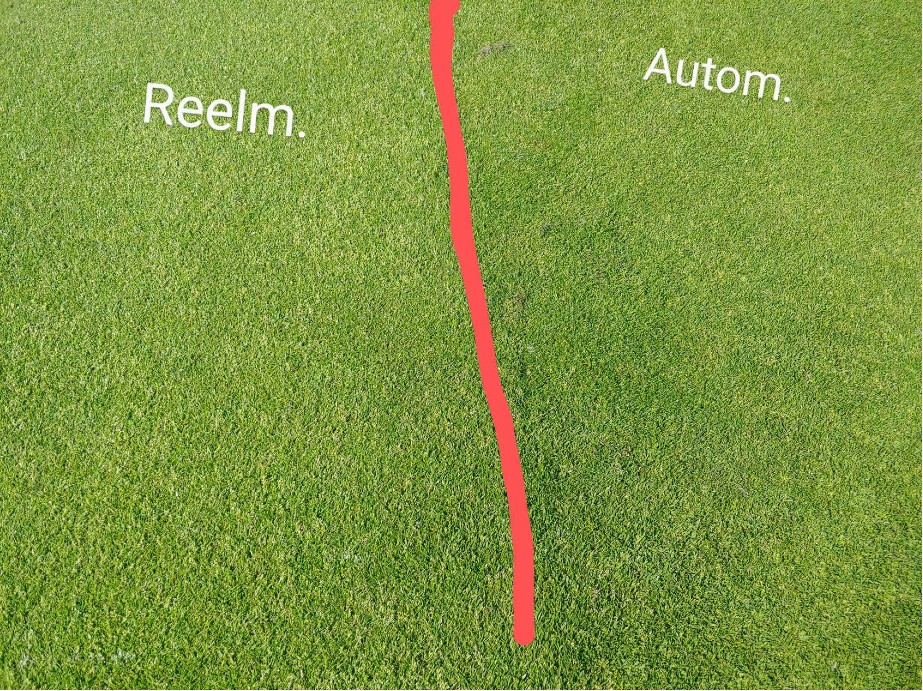 The use of diesel and time spent for manual mowing was recorded three times (June, July and September) at the five courses. Intentionally, these data should have been compared with data from the energy loggers at the docking stations for the robotic mowers, but that has not possible due to a mistake when programming the loggers at Husqvarna. 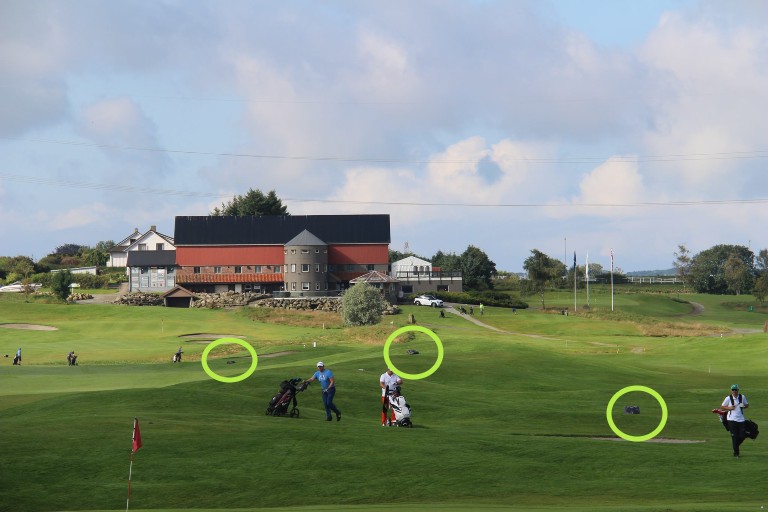 Golfer survey
The survey showed an overall positive or neutral attitude to robotic mowers, but many players asked for implications of the new technology on the rules of the game.  Good communication with the players is therefore important before introducing robotic mowers.

Some of the comments from players having positive attitudes to the robotic mowers were (answers from Bærheim, Grenå and Jönköping):

Among players having negative attitudes to the robotic mowers, comments were (answers from both Bærheim, Grenå and Jönköping):

The project is scheduled to continue until 1 July 2023.