Tab Buckner – Outstanding in his field 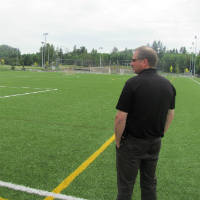 About a year ago when he was WCTA Vice President, Tab Buckner offered to tour me around many of the Township of Langley’s (TOL) extensive recreational facilities.  I took him up on his offer and now that Tab is President, I thought we had better get the feature article written and published before his year at the helm of the WCTA was over.

The tour last July was impressive – a day of viewing various sites from tennis courts to spray parks to Frisbee golf to BMX tracks to grass and synthetic turf sportfields.  I’ve now decided that if I’m going to move anywhere in the near future, it would have to be to Langley just so my kids can play every sport imaginable.

Langley has an interesting history dating back to the retreat of the last glaciers some 10,000 years ago when Sto:lo First Nations people were thought to be the principal occupants.  The Langley area was the first part of the lower mainland of British Columbia where European settlement was established and it quickly became a hub of activity for fur trading followed by the effects of the Fraser River gold rush where it became a large supply centre.  Increased farming took place to supply the growing food demand as more people arrived in the area and on November 19, 1858, the proclamation of Crown Colony status took place in the Big House at Fort Langley proclaiming Langley as the birthplace of B.C.

Fast forward to today and Langley has become metro Vancouver’s suburbia.  With a population of 104,000 the TOL comes somewhere between Kelowna and North Vancouver on the 10 largest cities in BC list (depending on what list you look at and whether or not you include the City of Langley which is surrounded by the TOL but that’s another story).  It’s a big place geographically too, bordering the Fraser River to the north, 195th street to the west, 276th street to the east and the US border to the south covering 316km2, 70% of which is still in the Agricultural Land Reserve.

This bedroom community takes its recreation very seriously and has invested millions into sporting venues like the new Langley Events Centre and Willoughby Park to satisfy the wants and needs of a still growing young population.  I get the impression from Tab and from general observation that these facilities are very appreciated and popular within the community and the demand to keep a high quality product is a top priority for town council. 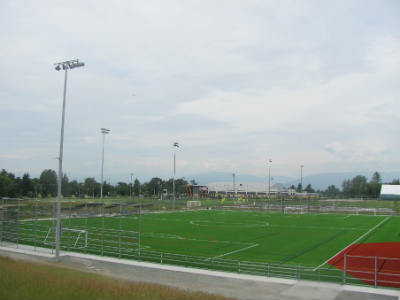 Tab joined the Township’s Parks Department in 1981 spending two summers working as a high school student then continuing while in university until 1988.  After an almost two decade absence from the TOL, he returned to in 2006 to manage the landscaping and boulevard maintenance for the Engineering Operations Department.  Then in 2008, Tab accepted a postion as Parks Operations Manager and was promoted to Manager Parks Operations and Cemetery Services in 2010, the position he currently holds.  Prior to working for the TOL Tab had been employed for 18 years for the Langley School District in the Grounds Department working his way up the ladder from labourer to foreman.  Tab graduated from the Kwantlen University Turf Management program in 2002.  He’s been a WCTA member since 2002 as well and jumped into the volunteer world of WCTA directorship in 2008. 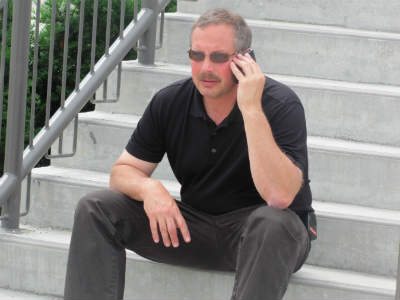 His current responsibility at the Township is certainly diverse, overseeing 59 plus sportsfield complexes and an impressive number of ancillary facilities including 8 fieldhouses, 25 tennis courts, 5 skate parks, 6 sportsboxes, 1 running track, 1 grand stand, 5 spray parks and 48 playgrounds.  That’s not all though.  There are 101 parks and conservation areas including 3 cemeteries and multiple greenways, 170 km of multi-use trails and a boathouse on the Fraser River to take care of.

While touring together, we seemed to pass one of his sites every few minutes.  I can’t imagine how each could be personally inspected in a single year; I don’t think I would remember where they all are!

Of course, the TOL has a great crew looking after things but perhaps not as much labour as you might think.  Lead by Turf Foreman, Kevin Fraser, Infrastructure Foreman, Jerry Kotanko, and Cemetery Supervisor, Kevin Bunnett, a  crew of 17 full time employees plus 11 seasonal full timers are tasked with caring for the Township’s outdoor recreational assets that total over 1100 acres.   Annual operating expenditures come in at only $3,700,000, encouraging Tab to use some innovative ideas that one normally wouldn’t think of in a municipal setting such as engaging user groups to help maintain fields, in particular, ball diamonds. 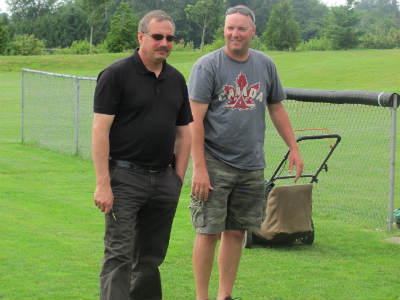 Tab, his wife and two teenage daughters call Langley home and are a big part of the community.  Take for example when the 2010 BC Summer Games came to town, Tab not only had many special preparations and extra duties tied to preparing the sporting venues for high level competition, he also involved his entire family to help with a variety of volunteer activities daily from dawn to dusk.  “The event was gratifying,” he says “and it really showcased what the Township has to offer.”

At this time of year, Tab spends more time in the office allocating field times to user groups and managing resources than on looking after turf but overall management is a big part of his job.  In a conversation en route to a Board meeting a couple weeks ago, Tab was discussing an issue that he had raised at the monthly parks crew meeting concerning other TOL department employees who were recently terminated over time theft.  He reminded his employees that the public is watching and if they were doing something they should not be and it gets reported ……”it opens up a big can of worms”.

“Firstly I would speak with the employee’s immediate supervisor,” Tab says, “and if they do not have an explanation, I would then go to our GPS software to track the movements of the employees work vehicle or equipment.”   The TOL has installed GPS sending units in all of its vehicles and equipment, mainly as a tool for data collection only, for example, how long to mow a specific field or park, however if an issue arises about an employee then the GPS can be used for investigation purposes and that data collected can be used for discipline.

If golf course superintendents have members and daily fee players to scrutinize their work, imagine the feeling of being under the microscope as every single taxpayer watches your every move, many of which are armed with their telephone and ready to call the town office reporting anything they feel isn’t quite right.  Tab takes it all in stride as part of the job and understands the reality of municipal work and that it’s all part of pride in the community. 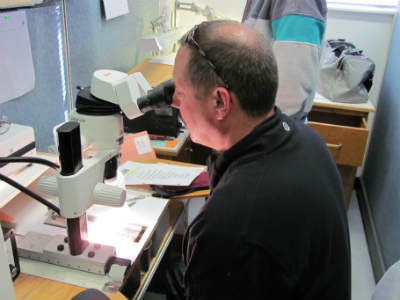 On servitude with the WCTA, “It’s just something I wanted to do and be part of,” Tab states adding, “it’s a great learning experience and hopefully I can help steer the association through some of our more challenging times.”

With a dedicated group of directors behind him and the tireless work of the previous boards before, I’m sure our members would agree that Tab is well on his way to achieving that goal.