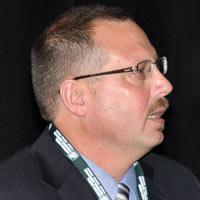 Season’s Greetings!  As my term of President began this past January, the year was already starting off as a very difficult one for our association.  Major challenges we were and are still dealing with include attracting new members, adding value to WCTA membership, putting on a worthwhile and financially viable trade show, strengthening allied partnerships and exploring new avenues of revenue generation just to name a few.

As well, and of perhaps utmost importance, is to ensure we are moving the association in the proper direction especially as pressures from beyond our control exert influence on the turf industry.  These we cannot avoid but we’re fortunate to have a strong structure in place that can advocate on behalf of our membership.

Almost a year through my term and at the end of another year, I’m happy to report your Board has made substantial progress.  Sometimes victories are small and tedious, like reviewing and updating our operations protocols and sometimes they are large and will have lasting effect like our partnership with the Sports Turf Association or our advocacy efforts to provincial MLA’s in regards to the pesticide issue.  I would like to say I’m confident we’re heading in the right direction and before going too much further, I wish to thank each Director for their efforts over the past 11 months.  They are: 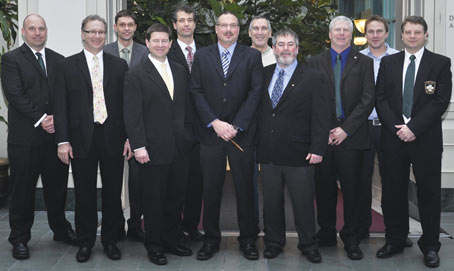 Speaking of Directors, we will have spots open on the Board next year to be filled at our 2013 Annual General Meeting.  Please think about standing up to serve for this worthwhile organization.

Membership: I want to thank everyone who has already paid their 2013 dues.  Close to 50% of our members have done so and the sooner the rest come in, the sooner staff can focus on other things!  We’re currently sitting at 736 members which is up about 38 people from last year and something I would consider very positive.

Communication: The new look of the TLN has been well received since the first issue came out late in 2011.  It’s an example of one of those large victories which was spearheaded by then President, Scott Mitchell.  Our goal with the Turf Line News is to present relevant educational and information articles and reports that interest our members.  It’s also one of our important revenue generators and I would like to thank all our advertisers for their support.  I encourage all turf managers to support these suppliers as best they can.

Our new website was launched earlier this year and has also been well received especially in the last thirty days with a 50% increase in visits.   The numbers obviously has a lot to do with the seasonality of our industry but we’re glad to see our members using this valuable communication resource.  There are plans to make improvements to the site over time like online purchases and payments, CEC record lookup and even a member only section.

CEC Program There were fewer overall CEC opportunities this year but the WCTA continues to encourage seminar organizers to apply for CEC point accreditation if their seminar applies to pesticide use and IPM.  If you plan to attend a seminar that you think should be awarded points, have the organizer contact us.  With Viola retiring, there has been a lot of work for Leslie Carnell but she is up to speed and is ready to answer any of your questions.

Research: 2012 projects are in progress and we’ll report on those results next summer.  The 2013 call for proposals deadline was December 3rd and we’ve just received 16 submissions to consider for funding.  This year, the call was executed by the Ontario Turfgrass Research Foundation on behalf of several regional funding groups including the WCTA.  We continue to put a very high priority on turf research funding and I would like to hear your ideas on how to increase the dollar value of this program.

Allied & Advocacy: The WCTA was represented at many allied events this year as we continue to strengthen our relationships with similar organizations.  Personally, I was able to get down to the NTA Conference in Oregon, the STA Field Day in Toronto, the BCRPA Spring Training and a couple BCGSA meetings.  I will be attending the Sports Turf Association Annual General Meeting, held in conjunction with the Ontario Turfgrass Symposium in February as the WCTA designate to be elected as a Director on their Board.  We’ve also been invited to attend the Sports Turf Managers Conference being held in Florida which I will attend on behalf of the WCTA.

The Sports Turf Association membership deal is starting to gain traction with 19 of our members signed up.  If you have not heard of this offering, anyone residing in Alberta or BC can join the STA through us for half price.  This is obviously directed toward our sportsturf people but some of the golf course superintendents out there might find the TGIF subscription quite valuable.

We continued representing our golf members at the Allied Golf Association of BC table with Director Trevor Smith and Executive Director Jerry Rousseau as our representatives.  The AGA of BC continues to advocate for golf in this province including everything from the pesticide issue to the unfair tax treatment of golf courses.

Conference: We’re getting ready for our 50th Anniversary Show and there needs to be a good turnout from our membership to make sure it’s a success.  The conference brochure went out with the December Turf Line News and if you’ve had a chance to look through the program, you’ll soon see it’s very comprehensive with 30 hours of seminars being offered and an expanded allotment for dedicated trade show time.

The pre-conference seminars consist of one for golf and one for sportfields both to be on Sunday, March 3, 2013 in the afternoon from 1-5pm. In past when the pre-conference was held it was an all-day event however with two coffee breaks and a lunch breaks it only actually net 5.5 hours of education time. The new format provides fours of education at a reduced cost because the food and beverages are not required for that day. But the best benefit is that in most cases you can travel on Sunday to Penticton in the morning to partake in the pre-conferences thereby reducing a one night hotel charge.

I’m pleased to report the trade show has seen a lot of interest and we’re currently 87% sold out.  Some of last year’s suppliers are a little slow with the paperwork so we expect to be close to 95% by the end of December.  Eight new exhibitors are signed up with several more who are very interested in participating.  What this means for delegates is many more new products and services on display at the show.

We’re also excited about the social events this year which kick off with our President’s Reception / Opening Ceremony / Awards Presentation on the Sunday evening.  The Monday afternoon Fest-of-Ale on the trade show floor is the most popular function of the conference and that will be followed by the BC Superintendents Monday Night Social and Dave Creamer Memorial Hockey Game.  All registered education program delegates receive a free ticket for Monday night so be sure to attend.

Administration:  Behind the scenes there is a lot that must be done to operate our association and the more experience you gain as a Director, the more you see this.  We have been working hard to improve our administrative functions over the last few years and while there is still much work to be done, the progress has been steady.  Innovation is critical and when we can do things like acquire licenced copies of Windows 8 Professional for almost no charge through a special program for not-for-profit associations, it saves us a huge amount of money but it also helps us become more efficient.

In closing, I would like all WCTA members to know there are many other irons in the fire and ideas on the table that we will continue to pursue and communicate to you.  I welcome any suggestions and constructive feedback that would make our association even stronger - my email is tbuckner@tol.ca and office phone 604.532.3504.