On behalf of the entire WCTA membership, the Board wishes to thank Jesse Cowan for his service to the turf management industry. 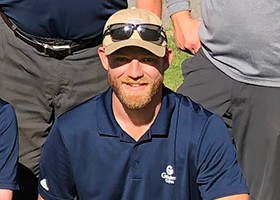 Jesse, who joined the WCTA Board in February 2020, has stepped down as a Director and left his superintendent position at Gallagher’s Canyon to manage the family liquor store in Kelowna, BC.  We know what you’re thinking -  yes, there may be discounts available to turf industry professionals!

While Jesse’s tenure on the Board was relatively brief, he learned the ropes quickly and always gave thoughtful input to the conversations and issues at hand.  His claim to fame and we quote, “I never got to attend a single in-person meeting.”

Unfortunately, that’s the way it’s gone over the past 18 months or so and while we first thought Jesse was a little bit shy, it turns out that couldn’t be further from the truth.  On a serious note, thanks for your efforts as a volunteer Director and all the best in your new venture!