With immense sadness, the family of Graham Arthur DREW announce his peaceful passing on Monday, July 5, 2021. 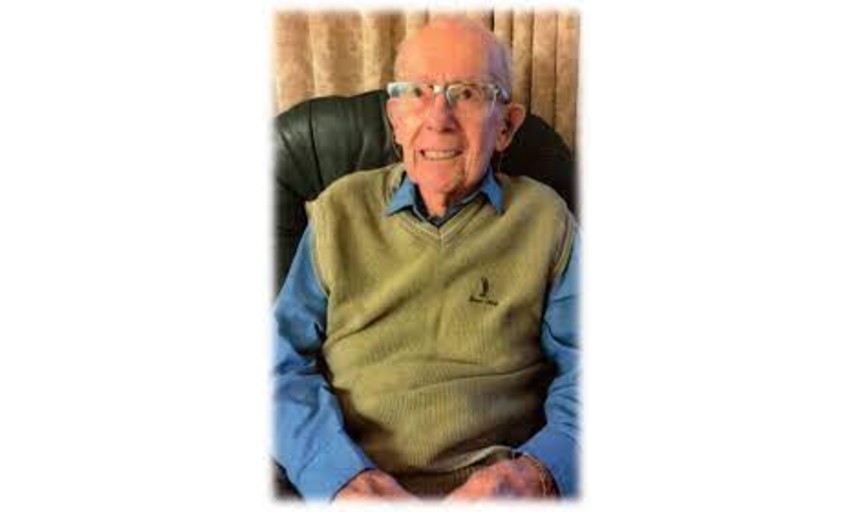 His four children were by his side. Graham was 97 ½ years young and living at the Lynn Valley Care Centre in North Vancouver, BC. He battled courageously through the outbreak of Covid 19 at the Care Centre even being diagnosed with the virus and surviving. Graham had been experiencing Alzheimer’s for several years since his early 80’s gradually declining over the pandemic until his final months where the decline advanced. He was a pillar of strength and resolve, showing great tenacity to continue living.

Graham was born in Vernon, BC on January 4, 1924. His parents William and Lilian Drew (nee Belgrove) operated Drew’s Meats in Vernon. Graham had six older siblings including Herbert, Phyllis (Irving), Edward, Evelyn (Turner), Beryl (Arnott) and Vera (Mooney). The family moved out to the coast enjoying a time in Duncan, BC, eventually settling in Victoria where there was greater opportunity for the older children. As a teenager during WWII, Graham joined the Merchant Navy patrolling BC’s coast in search of enemy ships and submarines, thus missing his high school graduation celebration in order to serve Canada. For a five year period after the war, Graham, along with brother Herbert, operated the family ‘Glamorgan Farm’ on the Saanich Peninsula at which time he met Hazel Elizabeth Hawkins. Graham and Hazel married in Victoria in August 1952 and later moved to Vancouver. The couple eventually built a house in North Vancouver's Canyon Heights neighbourhood where they raised four children who attended Canyon Heights Elementary and Handsworth Secondary Schools.

Graham pursued post secondary studies at UBC earning his Bachelor’s Degree in Agriculture, with a focus on Poultry Science, which helped launch his career with the UBC Centre for Continuing Education and the beginning of building a family. In subsequent years, Graham would pursue and earn a Master’s Degree at UBC while still working at UBC and maintaining a family.

Graham travelled extensively to many parts of the world as part of his work with the UBC Centre for Continuing Education. He documented these experiences through slide pictures, which would become part of a presentation after his travels. Upon his return, the family eagerly anticipated a slide show night as Graham would give extensive, detailed accounts of events and tell the story of his travels and connections along the way. Graham’s children believe these slide show presentations helped stoke their curiosity of the greater world outside of home.

Along with his professional pursuits, Graham was particularly active in various recreational interests. In his youth, Graham was passionate about lake and ocean swimming and diving. He shared this passion with his children. They enjoyed many swims at the local beaches in Vancouver and made many sojourns to Ambleside, John Lawson and Whytecliff in West Van and Third Beach, Locarno and Spanish Banks in Vancouver. During travels, family would have their swimsuits at the ready as they drove. Graham had a particularly keen eye for a good place to go for a swim. After a swimming adventure, swimsuits were hung on the side view mirror of the car to dry and keep them “at the ready” for use at the next swimmin’ hole along the travel route.

Graham’s children will always remember his weekend chess games with various neighbours, including Keith Ridyard, and tennis matches and fishing with his long time friend Stu Hamilton. How wonderful that fresh salmon was! He was a Lifetime Member and Past President of the North Vancouver Lawn Bowling Club and enjoyed great success in competitive tournaments. On occasion, Graham took his grown up children out for some “bowls”, including Father/Daughter/Son Bowling Tournaments. As his grandchildren grew up, he gave them special attention guiding them on the rules and strategy of the game. He took great delight during social afternoons in the clubhouse enjoying a ‘bevvie’ with fellow members and solving the world’s problems in lively conversation.

Sundays were special as Graham took the family on “mystery trips”. Many of these excursions would be to check out places like fish hatcheries or farming activity in the Fraser Valley. Other trips would be hikes of the local North Shore trails, often leading to remote backcountry areas in the Howe Sound region. There were regular hikes up Grouse Mountain along the old chairlift leading from the top of Skyline Drive to the Village Inn (bottom of ‘The Cut’ ski run) where a cup of hot chocolate was enjoyed or an ‘Oh Henry’ bar. The hike was never complete without the purchase of a pack of Juicy Fruit gum for the descent of the mountain.

Graham’s children fondly remember his support for gaining skills and healthy living experience in extra curricular learning within arts, culture and sports. These activities included music lessons in private and community groups, soccer, baseball, softball, skiing and sailing. He loved to be outdoors and took his children to local outdoor spaces regularly or on longer camping trips. He was mindful that these experiences helped shape and enrich people in positive ways.

Graham was an individual who demonstrated constant growth and lifelong learning. After a busy and fulfilling career and as his children left the nest he remained busy and active in retirement. Using his professional skills from his UBC days organizing large conferences, he took on the challenge of assembling group tours of lawn bowlers to places like California and Australia. At home, Graham was always willing to help immediate family, friends or lawn bowl colleagues with their personal tasks. His family remembers he used his organizational skills to spearhead the 1989 Drew Clan Reunion of 75 people at Camp Dunlop on Okanagan Lake: “Those were the best hot dogs and corn ever!!” He didn't miss a beat, filling his days with many interests.

Graham’s love for travel in his work continued through his retirement years as he explored the world as a vacationer. With his companion Betty, or brother Herbert, he travelled almost yearly to places including Australia, New Zealand, Egypt, Cuba, as well as many countries in South America and Asia. Though, he and Betty particularly loved their trip to Kenya where they participated in a safari viewing exotic animals. Each trip fostered new experiences and friends.

When at home in North Vancouver, one may have found a 70+ year old Graham at the lawn bowling club lying on the ground painting the underside of a bench or painstakingly tending to the greens. At the age of 80, with murmurs of Graham slowing down, he managed to steam ahead at full throttle, even if for shorter periods. At 88, after his South American adventure, he announced he would terminate his world travels and remain closer to home within British Columbia, a province he dearly loved.

In Graham's final years, while experiencing both physical and mental decline, he did so in a graceful, dignified, sometimes stoic manner but often with humour and natural wit! Despite the numerous challenges in his care, there were many more bright moments for those in his company. His family did not encounter many complaints, but rather a man who maintained a positive disposition. Much of Graham’s day was punctuated with familiar songs or tunes, some being improvised where Graham would exhibit an inclination for word rhymes. Graham enjoyed his visits with companions Penny and Alan, with whom he established wonderful relationships as he considered them his friends. Another friend was Joni, a retired nurse; one day recently after a social visit with Graham, she exclaimed "If this is Alzheimer's, then this is the best kind to have!".

Graham’s last year and a half was marked with significant changes concurrent with changes experienced by a world in pandemic. In March 2020, he contracted and overcame Covid-19. Later in Spring, he suffered other complications resulting in a traumatic hospitalization. After consultation, he was transferred to the North Shore Hospice. In spite of family being notified Graham’s situation could be end of life, he rallied to survive and was able to return to his home at Lynn Valley Care Centre spending another year living under Covid restrictions with very limited family contact. Graham experienced a rapid decline in the Spring of 2021. As BC opened up in mid June ’21 and family were able to visit, it was apparent the year had taken a toll on Graham. In his final three weeks, Graham remained lucid and aware of his loved ones, though he was less talkative and was singing less often. He would talk about swimming, kick a ball or give a smile even near his final day.

Ultimately, Graham Drew was a positive influence on those he knew and loved. Whether at work or play, with family or friends, he embraced and fully engaged life and being with people. His indomitable and very fun-loving spirit was adored and will be missed. Graham Drew, the ‘Guy with a Twinkle in his Eye’.

Graham is survived by his children, Debbie Drew (Jim Short) of North Vancouver, Brad Drew and Lita Weaving of Victoria, Craig Drew and Tiffany Drew (nee Martin) of North Vancouver, and Deanna Harlow (nee Drew) and Brian Harlow of Squamish and long-time companion Betty Maxim of West Vancouver, grand-children Joel and Jenna Short, Aaron, Hayley, Emerson, and Weston Drew and step grandsons Fraser and Carter Hillier, and Allison and Timothy Harlow. He is predeceased by his parents, siblings and spouse of 45 years, Hazel Elizabeth Drew (nee Hawkins). Graham had many nieces and nephews who, over the years, rejoiced in keeping in touch to see how Uncle Graham was doing. The family have enjoyed the sharing of their stories and memories of Uncle Graham. Graham has been cared for through First Memorial Services and has been cremated as per his direction. The family give thanks to the folks at Boal Chapel for their kind help and graciousness. A memorial service is not planned at this time, though we are considering a family gathering down the road.

Additionally, the Drew family recognize and give thanks to all of those people and organizations who were an important part of Graham’s care in past and recent years; • Dr. Leon Bard, Graham’s adored and long standing family GP; • Dr. Leslie Gallon Dental Group (aka Dental Divas) whose excellent professional and personal care had an extensive impact on Graham's physical health, especially in later years; • Dr. Scott Comeau, Geriatrician; • Dr. Justin Lee, Urologist; • The many staff members of the care team at Lynn Valley Care Centre; • Penny Vlahos and Alec Morgana of, “Call the Grandkids” Companion Care and Alan Borromeo, independent Companion Care Aid; • Dr. Jeremy Saunier, Hospitalist, Dr. Edmonds and Dr. Walker and the Palliative Team at Lions Gate Hospital and the North Shore Hospice where Graham spent recovery time in Spring of 2020.

In lieu of flowers, donations may be made to the Alzheimer's Society or the Lions Gate Hospital Foundation.

Editor: Thank-you Nellie Oostindie, wife of founding WCTA member Dirk Oostindie, for letting us know that Graham had passed away.  Graham Drew was the very first WCTA President in 1958, hosting the inaugural WCTA Conference at UBC.