A Design For The Past, Present & Future: Sagebrush 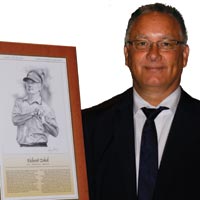 Richard Zokol Shown At His Recent Induction Into The Canadian Golf Of Fame.From the outset the principals at Sagebrush Golf and Sporting Club near Merritt, BC were determined to produce a golf course that would ease design and maintenance pressures put on the golf industry by environmentalists, the public and the government by creating a truly environmentally sensitive golf facility.

Two years after opening it is apparent that developer Richard Zokol, agronomist Armen Suny and designer Rod Whitman were more than successful in this quest by following a minimalist approach in golf course design.  The minimalist approach is a throwback to the early days of course design where earth moving is kept to a minimum to parallel a time when construction equipment and techniques were not as advanced as they are today.

The founders sought to construct a course that would rival the top courses in the world without the necessity of moving huge amounts of earth. Zokol stated in a 2009 Vancouver Sun article, “the main prerequisite is you need a great piece of land. Mother Nature must already have built the golf course and you discover it and then unfold it. You don’t get in there and excavate the side of a mountain.”

Zokol continues, “There’s nothing like it in Canada. Conventional golf we are not. There are only about 10 golf courses like this in the U.S. This is minimalist golf. A minimalist course that is going to charge a maximum price for its membership.”

Sagebrush Has Been Developed With A Least Impact Approach

Although the course may be located on a steep piece of property, Zokol and Whitman moved as little earth as possible to create their gem.  “There are several holes out there where we are not moving any dirt to speak of,” adds Alberta based Rod Whitman, “where we have done some fills; it’s just basically to get the fairways wide enough to play golf on. In the end, we are spending a lot of time just trying to blend it in so it won’t look like we’ve done that.”

“Rod’s real skill is creating a situation where you have moved dirt, but it doesn’t look like you have. That’s a very important factor in minimalist golf,” confirms Zokol.  The fact of the matter is that minimalist construction principles are about truly moving as little earth as possible not simply appearing too.  But to be fair, few courses since St. Andrews have been built without moving earth.

If minimalist golf means maintaining the course using as little inputs as possible and is as rare as Zokol indicates then some comments made on the topic in the Vancouver Sun has raised some eyebrows. 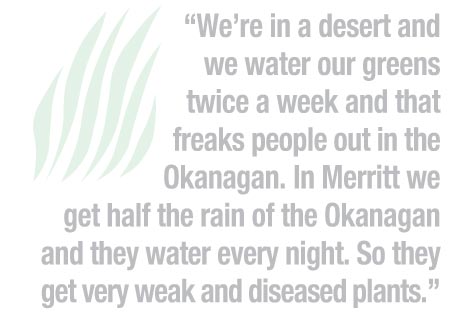 Zokol was quoted as saying, “We’re in a desert and we water our greens twice a week and that freaks people out in the Okanagan. In Merritt we get half the rain of the Okanagan and they water every night. So they get very weak and diseased plants.”

Agronomist Armen Suny followed up with the comment, “The philosophy is to try to mimic natural rain events with irrigation. Grass didn’t develop over all these years by getting the computer-generated perfect amount of water every night.”

Fair enough... if you are getting the number of rounds that Zokol is happy with, between 20 and 40 a day, maintaining turf quality is much easier with limited play.  These are the kind of comments that are guaranteed to get a response and one area superintendent summed up the feelings of many, “Golf course superintendents in the Okanagan (and elsewhere) are highly skilled and trained individuals who are capable of maintaining their golf courses as they see fit. All superintendents are aware of the need to irrigate turf judiciously to not only produce healthy turf but also to conserve water. To imply publicly that superintendents in the Okanagan are unable to properly maintain their courses is tantamount to a slap in the face. We all use irrigation systems to mimic rain events however some are more fortunate than others to have state of the art systems and limited play to enable the completion of other daily tasks. It is common knowledge amongst Superintendents that irrigation control plays a major role in the health and stress put on the turf.”

Further, given the fact that Sagebrush was built in the late 2000’s they have been blessed with the virtues of newer irrigation technology and more drought resistant turfgrass species.  Courses built earlier than Sagebrush and certainly the ones constructed decades ago are fighting an ongoing battle with outdated and often antiquated systems that cannot possibly compete with the technology of today.  Superintendent Norley Calder has 100 per cent control of his irrigation system at his fingertips that allows him to water on a site specific basis which is contrary to some turf managers who spend a great deal of time and money fixing and dealing with their older, (some) failing and less efficient systems.

“Often, irrigation decisions are not determined by what is absolutely best for the turf. It is often a function of the technology available at the time of construction in regards to irrigation and drainage. Other factors such as soil type and structure, amount of play, labour budgets as well as turf species and many other factors play a critical role in daily irrigation decision making.”

Zokol went on in the Sun interview to say, “We spent $560,000 on maintenance last year and I guarantee you that our greens are among the best in the nation.”

Responded the same area superintendent (who asked not to be named), “Having the best greens in the country would be fairly easy to achieve on a relatively new golf course getting 32 rounds per day. Try putting through 32 rounds of golf per hour.”

In asserting that maintenance costs at Sagebrush are a quarter of that of some high end courses, Zokol seems to miss the fact that a large portion of most maintenance budgets is spent doing jobs such as: irrigation repairs, picking up garbage, raking bunkers, fillings divots and repairing ball marks following a day of 300 rounds. How much can Sagebrush possibly be spending with 32 rounds per day? ”

Bottom line is there is no question Sagebrush is bang on the mark in remaining true to its minimalist principals. But is Zokol off-base comparing the elite Sagebrush with other older courses who rely heavily on pay as you players and lots of them?

We may get the answer when Zokol and Suny speak at the WCTA Conference and Trade Show in January.