Locally grown takes on a new meaning at several golf courses where gardens have become a means to provide home-grown vegetables and fruits for members and staff.

This article is reprinted from the August 2012 Volume 50(16) of the USGA Green Section Record.  Copyright United States Golf Association.  All rights reserved.

More people are finding satisfaction in raising their own vegetables or at least purchasing locally grown, fresh in-season produce. The taste of fresh home-grown vegetables is matched only by the sense of accomplishment that a successful harvest brings.

The growth in farmers markets and Community Sponsored Agriculture (CSA) programs across the country attests to the public’s desire for fresh food and their concern for where and how their food is produced. This attitude has taken hold at several golf courses as a result of some individuals who share their passion for gardening and  love of fresh food. This article provides a story of how individuals at three golf courses in Connecticut, New Jersey, and Virginia have developed productive organic gardens that provide fresh fruits and vegetables along with other interesting by-products.

The garden at Aspetuck Valley CC is the youngest garden of the three golf courses. It was planted in the spring of 2011 when a neighboring property was purchased by the Club. The 10,000 sq. ft. garden was the idea of Eric and Julie Cook, members and experienced gardeners. Initial preparation and planting was completed by the maintenance department under the guidance of Rick Shock, CGCS, and a local farmer hired by the club. Soil testing was performed, and limestone, composted manure, leaf mold, and other amendments were added to prepare the soils for planting. A simple irrigation system was built by the staff. The initial costs for labor, irrigation, soil preparation and other materials were minimal and absorbed by the maintenance department. A deer fence was also installed to protect the garden at a cost of about $2,000.

Lettuce and other cool-season vegetables were planted in early spring, followed by herbs, tomatoes, and other summer vegetables. Black plastic was used around the plants as mulch to minimize weed pressure. Shock’s staff assumed the maintenance duties as the season progressed.

Head Chef Gerard Clinton was also a driving force as the garden became established. His staff harvested and cleaned the vegetables in the first season and will be selecting seeds and plant varieties going forward. A horticulturalist will be added to the staff this year to help tend the garden in addition to other duties on the golf course.

In its first season, the garden produced an abundance of vegetables that supplied the clubhouse, members, and staff. Looking forward, various social activities are being formulated around the garden in the coming season as it has “produced” a new level of excitement and fun for the members and staff alike. 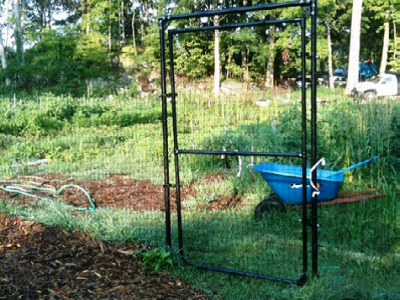 The garden at Aspetuck Valley CC is protected by a nylon fence that protects the vegetables and herbs from deer and other opportunistic animals hoping to share in the bounty intended for members and staff.

RIDGEWOOD COUNTRY CLUB, PARAMUS, NEW JERSEY General Manager Eban Ross at Ridgewood CC always conceptualized a working garden to provide fresh vegetables, herbs, and cut flowers for the clubhouse. Ross, a chef and avid gardener himself, fully appreciated the ability to work with and serve truly fresh food. The idea became reality once Ross teamed with Todd Raisch, CGCS at the Club, to find a site for the garden and prepare the soil for planting.

The garden began modestly but has since evolved into a series of raised beds that provide about 8,000 sq. ft. of growing space for a wide variety of vegetables and fruits, including heirloom varieties of tomatoes, musk melons, peppers, lettuce, beans, peas, cabbage, squash, sweet potatoes, strawberries, apples, figs, flowers, and herbs. Trellises are used to maximize space. Ross, who continues to manage all aspects of the project in addition to his regular duties, admits that the garden is a true labor of love for him. He selects the vegetable seeds and plants, plans the garden’s layout, directs the soil preparation and planting, uses cover crops to reduce pest pressure and build soil fertility, cultivates, manages pests, and even picks many of the vegetables that are produced.

The garden accounts for roughly 60 percent of the produce used in the clubhouse, equating to an estimated value of $15,000 to $20,000, or approximately four times the annual cost of maintaining it at $4,000 to $5,000. The garden is extremely popular with the members, who routinely visit the site to observe the garden and enjoy its tranquility. But make no mistake — it is the fresh vegetables highlighted on the summer menu that make the garden the success it is. Ross feels the garden will continue to improve and may grow further with the addition of fruit trees. 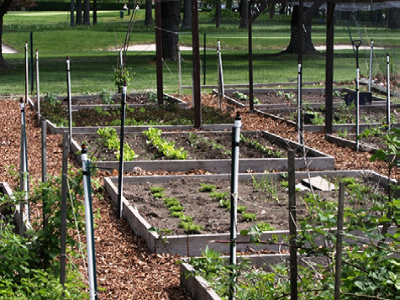 The garden at Ridgewood CC offers vegetables and cut flowers for the clubhouse while providing an interesting feature for the golf course.

COUNTRY CLUB OF VIRGINIA, RICHMOND, VIRGINIA The garden at the Country Club of Virginia is the idea of Executive Chef Gary Whitecotton. An accomplished home gardener, Whitecotton has always been passionate about fresh wholesome food and farming. He is sharing his passion by providing heirloom tomatoes, potatoes, squash, corn, cauliflower, Brussels sprouts, salad greens, and loads of other fresh vegetables to the members and staff at the Club.

Christian Sain, Director of Golf Course Maintenance, provides staff to till the garden and provide assistance with fencing and irrigation in spring. Composted garden refuse is combined with composted manure and added to the garden each spring to enrich the soil. Most of the equipment and materials used to build the 4,500 sq. ft. garden and prepare the soils were already on site or locally available for relatively low cost. Such costs were absorbed into the maintenance and clubhouse budgets. In its first year, the garden produced 2,200 pounds of tomatoes alone, which more than covered the total maintenance costs for the garden.

Whitecotton continues to plan the garden and does most of the planting and maintenance throughout the season. He is aided by Steve Saxon from the maintenance staff and horticulturalist Becky White. The kitchen staff helps with the garden’s harvest. White has also established beehives at the garden to aid in pollination and to produce honey.

The garden has provided much more than high yields of fresh vegetables. Whitecotton and Sain agree that the establishment and maintenance of the garden have increased comradeship and improved communication between the departments and with the membership. The garden site has hosted tours, specialty dinners, and other functions for member and non-member groups. Whitecotton is pleased the garden has become so popular and hopes it will continue to be a source of enjoyment and education long into the future. 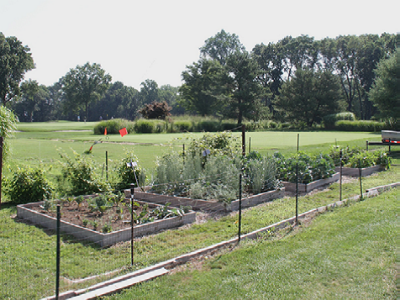 Early plantings are taking hold at Ridgewood CC. Raised beds are used because they keep the soils well aerated and offer an opportunity to plant at higher densities to maximize space. Raised beds also make it easy to heavily amend

All associated with the gardens have been overwhelmed with the support received from the membership and staff. All could also envision the concept growing even further in the future to produce an even wider array of vegetables and possibly expand into orchard fruits, nuts, eggs, and meat, where a site permits. The home garden concept is certainly not new, nor is the popularity of homegrown vegetables on the menu a surprise.

What has been a revelation to some, however, is the ability of the gardens to bring a sense of goodwill among the staff and members . . . and that all are doing their part to live and work in a more sustainable way.