Where is our Freshwater Going? 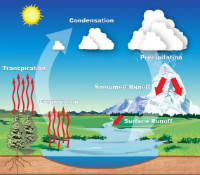 Where is our freshwater going? Have you ever wondered where water goes? There is so much discussion these days about water conservation, water shortages and drought and yet we live within a closed system with no way for water to escape outside of the atmosphere. So where is it all going?

Let’s back up just for a moment to put the question in perspective. We have made the argument for years and years that those of us in the irrigation industry need to be using irrigation water more efficiently. But it is challenging at times to make the business case for reducing water use based solely on reducing water bills when many of us live and work in areas where water costs continue to be subsidized and the cost of water may not be a major factor in the cost of doing business. As Canadians we are told that we live in a water rich region that houses approximately 20% of the world’s total freshwater resources. While less than half of that (7%) is considered “renewable” (ie: able to replenish itself in a timely manner), we are still in a very enviable position compared to the rest of the world. As a result, politics and perception have created water rates across the country that most often do not reflect cost recovery for the processing and delivery of the resource. Saving a client hundreds of thousands or even millions of gallons of water per year does not always add up to significant cost savings as yet.

So the reasoning for improving irrigation system efficiencies often includes a conservation aspect; sometimes as strongly weighted as that of potential cost savings. We talk about cost savings through reduced water use and less maintenance, improved quality for the plant material and of course, the marketability of implementing measures that will conserve our precious water resources. The rationale makes sense right? Always has to me. Until a client posed the question – “But how can we be running out of water? There’s nowhere for it to go.” In spite of my initial reaction that this comment was simply the quick witted argument from an environmental naysayer, it took only seconds to realize that this was a valid and important point and one that needed to be addressed. In order for those of us in the irrigation industry to conclude that we need to be much more conscientious about our water use, this question and the answer, have to be talked about. Not just talked about, but incorporated into our rationale for making better water use choices.

The reality is that yes, the planet is not going to run out of water. However, we are tapping our usable or freshwater resources faster than they can replenish themselves and therefore, we are in essence running out of water. Our demand is exceeding the natural supply and the situation is exacerbated by the climate changes we are facing. Here’s what Environment Canada has to say about water as a “renewable” resource:

“Water may be considered an inexhaustible resource because the total supply of water in the biosphere is not affected by human activities. Water is not destroyed by human uses, although it may be held for a time in combination with other chemicals. To be useful however, water must be in a particular place and of a certain quality…"

In certain locations… water has a much longer cycling time… In certain arid regions, the total water supply may be underground water that accumulated during past ages, when the climate of the region was more humid. Since that time there may have been little or no addition to this supply because of the existing climatic conditions. Because it’s cycling time may be extremely long and dependent upon the frequency with which wet and dry climates alternate in a particular region, such a water resource can be virtually nonrenewable.”

It becomes a matter of timing and at the point the word restraint would be worth mentioning. Even those of us without an economics education can understand the simplified concept of supply and demand. Environmentally speaking, the ideal situation is when the two are perfectly balanced. For instance, it is good to have enough of a particular species to fill the needs of those dependent on it, but not so much that it becomes a nuisance. However over thousands of years we have managed to lose sight of that balance and with technology ever advancing, exercising restraint has become less necessary as we can simply “make more” of whatever it is we want. The natural world of plants, animals and water are the losers in this scenario as their value has become downgraded within the myth that we can always make more of whatever we are running short of. Water is somewhat unique in that it is not disappearing, more accurately it is relocating. As we use it and release it to the atmosphere it moves around the planet, most often settling into the oceans that cover over 70% of the globe.

Images of the hydrologic cycle have not changed in essence over the years, but what they have often not included is some reference to the volumes of water that move from place to place in the form of evaporation, transpiration and precipitation.

The majority of the moisture in the atmosphere is from water evaporated from the oceans. Of that volume, approximately 90% of it returns to the oceans while only 10% of it reaches land as precipitation. Of the total moisture in the air, approximately 10% of it comes from plants (transpiration) while the rest if from oceans, lakes and streams. Source: US Geological Surveys Water Science School, http://ga.water.usgs.gov/edu/watercyclesummary.html

Historically the moisture in the atmosphere which comes primarily from the oceans, could sufficiently replenish the various bodies of fresh water in the form of precipitation. It could also infiltrate and replenish aquifers through pervious services and as such, a balanced hydrological cycle existed. As human demands for fresh water have increased and surpassed this natural cycle of replenishment globally, on any given day there are countless parts of the world that are operating in a water deficit. While some parts of the world have water resources intact, others have completely or nearly completely depleted theirs and Canada is being closely watched and likely courted, by those regions who find themselves without sufficient water resources. Whether or not you are politically active, our industry are major users stewards of our freshwater resources and as such, we should be following any movements with respect to selling of our Canadian water resources (look up Chretien’s call to Canada: Don’t be afraid of the water exporting debate, Globe and Mail, March 22, 2011).

While the world’s water continues to circulate, managing the volumes that find their way into our water reservoirs is critical to ensure that we keep ourselves in the “have” category when it comes to water. If we deplete our resources it is unlikely that we will have the ability and/or will to stop what we are doing long enough to let the cycle catch up. That is not where we want to end up. We have the knowledge and experience to make influential decisions now to stay ahead of the curve and as a bonus, we can manage rising water costs as water rates catch up to realistic levels. Working to increase and maintain our water resource is achievable and worth the effort to avoid ever having to ask the question “where has all the water gone?”

The author: Shauna Burnell is not a scientist; she is a concerned individual who co-owns and operates Waterkind Consulting; an irrigation consulting company with the mandate of reducing irrigation water use by improving irrigation system efficiencies.