Another Look at Moss on Putting Greens 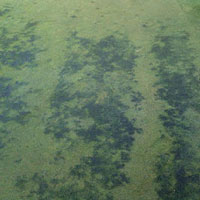 by Jason Haines - Ok so moss has been on my mind lately. It all started with a trip to a nearby golf course to look at their chemical moss control results over a few beers (pilsner).

We noticed that it seemed like the Kocide (copper hydroxide) was working pretty good. The moss was turning black which signified that it was dead.

Then the above picture started me thinking.

There was no moss where the tires of the triplex mower travelled on the clean up cut. Why was this? I posted in an earlier blog entry about possible reasons but I think I have figured it out. Before we get into what I think I feel that it is important to go over some characteristics of moss and also what other are recommending for moss control.

Moss does not have roots. It has rhizoids which serve solely as anchors. They do not absorb nutrients or water. Moss requires any moisture to be absorbed through their above ground surfaces.

Most papers that I have read on cultural moss control strategies say that to control moss you should increase drainage, raise cutting heights, and have properly adjusted irrigation.

While these are generally good recommendations for growing good turfgrass they have really nothing to do with moss and here is why.

Moss grows equally well on good and poor draining sites. The following picture shows moss growing quite nicely on bedrock. The peculation rates on this surface are zero! Now take the above picture of moss growing on USGA spec sand putting greens. It looks pretty happy too! 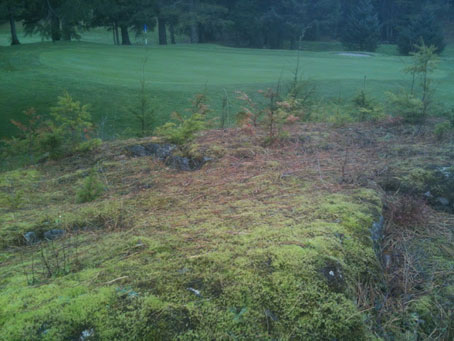 Raising the cutting height is another recommendation that often comes up. In my experience I have seen moss grow on turf cut at .090" and equally well at 2". Greg Evans will attest that there is no reason why a low height of cut will do anything to encourage moss.

The last point about a properly adjusted irrigation system also is a farce! Moss will survive sometimes up to a few years in the absence of moisture. Do you think that the moss in the above picture gets irrigated in the summer months? No way Jose! Most people seem to notice that moss often occurs in the ridges in their putting greens. Have you ever measured the moisture levels in these high spots? I have and they are consistently drier than the low spots obviously due to gravity. So as far as I'm concerned over watering has nothing to do with moss.

All of the recommendations that are given to prevent moss are useless if you want to prevent moss in my opinion. They are, however, pretty good recommendations if you want to grow good dense grass. Growing good dense turf is key to making it harder for the moss to invade. If you can grow a dense stand of turf at 2mm or at 4mm, in shade or full sun or on a train or on a bus, it makes no difference. If you turf is thin, there is the potential for moss to invade.

This next picture shows moss growing on a cart path. Again this cart path has zero drainage, is in full sun and is not irrigated but there is moss growing the entire length of it. Notice where the moss isn't. There is no moss on the areas of the cart path that the golf cart tires pass over. What does this tell us? To me it says that moss cannot tolerate traffic stress. From this picture and the first one I posted it is very clear that this statement is true. Now if you look at the first picture notice that where there is an increased amount of traffic there seems to be pretty healthy dense turf.

Back to the previously mentioned statement about how many turf manager notice moss on raised areas or ridges and the edges on their putting greens. Sure these areas might be cut a little closer than other areas due to the changing slope but is this really the cause? 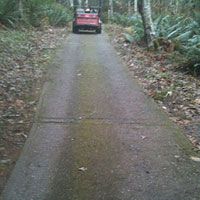 Now if you were to increase the traffic to levels only seen in LA then you would probably have thin or dead turf that would be susceptible to moss invasion. The key here is to manage the traffic in a controlled manner. How do we do this?? Rollers.

For the past two years I have rolled daily from March through to October on my course and during this time I have seen a steady decline in the moss populations on my putting surfaces. I didn't really know why until I saw the moss in the first picture above. It is now very clear to me that if we can evenly manage the traffic on our putting surfaces to discourage moss as well as grow healthy dense turf then there is no reason why moss should be a problem. We need a better understanding on moss wear tolerance so that we can more accurately manage it.

So forget all those recommendations about fertility, aeration, heights of cut, and chemicals. Grow healthy dense turf and roll as much as you can. Rolling also has other benefits that I have talked about quite extensively in other blog posts so I won't repeat them here.

Something that I would like to see is the difference between lightweight and heavyweight rollers as well as rolling frequency. I plan on comparing the ground psi of the triplex mower wheels with the most popular rollers on the market as well as the frequency that the superintendent was cutting his putting green clean-up cuts.

I have rolled daily for two years and have only seen positive results. Healthier better quality putting surfaces. Less labour and wear and tear on my greens mower and less moss and dollar spot.

Don't take my word for it though. Try it out and let me know how it worked.