From Chilliwack to New Jersey, Little Fish in a Very Big Pond. My experience as a Baltusrol Intern. 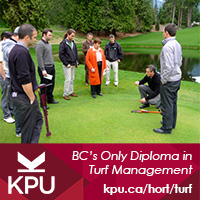 I started my career in turf management while in high school, my first job was at Cultus Lake Golf Club as a range boy. At the time it was just a part time job. I hadn’t yet realized that it would one day become my career path. If I was told that one day I would move to New Jersey, to work on one of most historic courses in the game of golf, I would have thought that was impossible.

I will always consider my home to be at Cultus Lake Golf Club in Chilliwack B.C. Cultus is a well-kept public course that was built on just 50 acres of land in the early 90s. It is family owned and run, and takes a small crew of just 5-10 people to maintain. It has been a great place to build my skills, but more importantly, it was where I began to gain a passion for this industry.

My time at Cultus couldn’t have been more different than what I was to experience during my internship at Baltusrol Golf Club. The saying “little fish, big pond” was bang on in this case. Baltusrol Golf Club has two full sized championship courses, both of which are ranked in Golf Digests list of top 100 courses. Both the Upper and Lower courses have held major events. In 2005, the lower course hosted the PGA Championship which it will once again host this upcoming summer. It’s safe to say that I was about to enter a completely different world then what I was used too.

The two courses are operated by a director of grounds, two superintendents, two assistant superintendents, two technicians, 12 interns and close to 40 grounds workers. This means that the crew was more than 5 times the size of little Cultus lake!  Walking onto this course truly felt like I had entered another world. Sitting on the airplane, as it came in for its landing at Newark Liberty Airport in New Jersey, was a nerve racking moment. I had only communicated with my contacts through email, and I really had no idea what I was getting myself into.

I was definitely out of my comfort zone. All 12 interns would be living in the dormitories that had been built above the administration building on the work yard. I was looking forward to having virtually no commute time! I spent my first couple days getting organized, but once I was settled, it was game time. They had a sink or swim kind of philosophy, which was intimidating at first, but it didn’t take long for me to settle into the routine and flow of the place.

During my first week on the crew a few things stuck out to me. Number one was the incredible size and beauty of Baltusrol. It was like it had jumped right out of one of those “golf courses of the world’ coffee table books, and in a way I guess it kind of had. The crew moved at such a quick pace and with an efficiency that blew my mind!  Everyone on the crew knew exactly what to do, and they did it well. The best example of this was during one of the tournaments we hosted, where inbetween shotguns, we had just one hour to cut and water the greens, change the pins and move the tee markers. I was used to seeing that done over a span of four hours, not just one.

I got to know my 12 fellow interns quite well considering we all lived together, worked together and spent our leisure time together. Learning how to be a part of a team was a big part of my time at Baltusrol, both on and off the course. The interns spent lots of time working together, whether that was on one of our re-sodding projects or finding the best way to keep the dormitory clean.  I discovered that at the heart of teamwork is good communication. All the interns came from different backgrounds and had different strengths, which could be challenging at times, but it also provided a great opportunity to learn from one another. Being the only Canadian on the team was definitely interesting but I had some fun with it, especially when asked some truly ridiculous questions. No we don’t all play hockey, but yes, we do love putting cheese and gravy on our fries.

The internship program at Balutsrol was organized in a way that allowed me to focus and strengthen my skills in the areas I really wanted. I was able to walk away from the program with all my goals met to beyond satisfaction. What surprised me the most was that my experience was more than just learning how to syringe a green or change a championship pin. It was learning how to work as part of a team, how to face challenges, and how to deal with mistakes. I learned that growth only occurs when you step out of your comfort zone, and most importantly that attitude is everything. If you would like to get a more detailed look at my experience as a Baltusrol intern, check out my blog at Jakesturfadventures.blogspot.com