A Restricted-Entry Interval (REI) is the amount of time deemed safe to return into an area after pest products have been applied.

Recently, there was some social media chatter regarding REIs as they apply to golf courses.  It quickly became apparent there are some misconceptions out there so Jerry Rousseau, WCTA Executive Director and I, decided we should triple check what we think we know about REI’s versus what the actual rules say and who governs this important component of pesticide application management.

We have reached out to Health Canada PMRA and WorksafeBC, both governing bodies of REI’s and did some lengthy internet research to see if we missed some form of notice about upcoming label re-evaluation, potential changes to REI’s as was mentioned on social media, or anything related to the topic.  We spoke with Mario Lanthier, who is currently rewriting the IPM Manual for Turf and reviewed the existing IPM Manual for Turfgrass Managers and the BC Pesticide Applicator Handbook.

Neither of us found anything new or pending.  While Jerry reached out to his contacts within the PMRA, asking if there were any planned changes to current label recommendations, ie. going to a minimum of a 12-hour REI across the board, my research focussed on WorkSafeBC regulations.  Expecting a slow reply from Health Canada, Jerry also contacted Dave Woodske, Industry Specialist, Ornamentals and Greenhouse Vegetables in BCs Ministry of Agriculture.

Both of these contacts confirmed there have been no changes to REI requirements.  No wholesale and standardized changes to labels, to require a minimum of 12 hours before entry, are being considered at this time.

My research brought REI’s to front of mind and I found something very interesting that directly applies to how I was managing worker re-entry.  Simply googling “Pesticide REI WorkSafeBC”, I found the following webpage with a statement that doesn’t exist in their regulation: 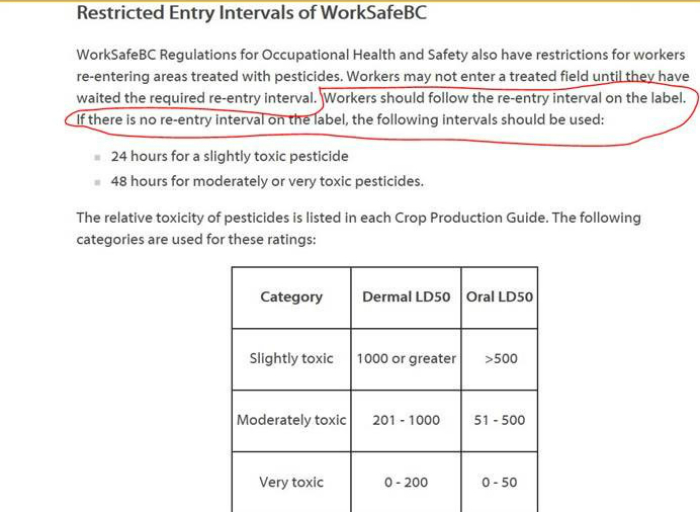 I immediately called WorkSafe for clarification, eventually speaking with Doug Irving, a hygiene officer with WorkSafeBC.  We discussed contradictions between the two documents after which he followed up with their agriculture division, both concluding that REI is what is on the label.  He did mention that REIs are on WorkSafe’s radar and we should engage their Regulatory Practices and open communications as a concerned industry.

Finally, I called a supplier thinking surely they would know if there were any changes to labels from the PMRA.  Marie Thorne from Syngenta had no knowledge of any changes and said she would contact her regulation department.  Although I haven’t heard back, I’m going to assume, as with all other comments, there is no change (at this time) to current label requirements.

By now, you’re probably wondering just what the actual regulations are…

Anyone applying a product with a ‘Pest Control Products Act Registration Number’ (PCP), which will be shown on the label, needs to understand that pesticides are governed by multiple jurisdictions.  In the case of REI’s in British Columbia, Health Canada PMRA and WorkSafeBC make the rules however in other provinces there are differences.

From a Health Canada standpoint, it’s simply stated that the label is the law:

“Health Canada carefully considers the safety of anyone who may be exposed to pesticides in Canada. As with all other use directions and precautions on a pesticide label, complying with REI directions is a legal requirement and part of pesticide safety.”

WorkSafeBC Regulations for Occupational Health and Safety have restrictions for workers re-entering areas treated with pesticides.

• Workers may not enter a treated area until they have waited the required re-entry interval.

• Workers should follow the re-entry interval on the label.

• If there is no re-entry interval on the label, the following intervals should be used (refer to above image for toxicity ratings):

• 24 hours for a slightly toxic pesticide

• If multiple products are being applied, use the longest re-entry interval as stated on the label.

Full bulletin here http://www2.gov.bc.ca/gov/content/industry/agriculture-seafood/animals-and-crops/plant-health/pesticides-agriculture/pesticide-safety/re-entry-intervals and I think it’s worth a read.

So what is the right answer?

For years now, I’ve been following WorkSafeBC’s restrictions on worker REI, 24 hours for pest products that have a LD50 value of 500 or more, perhaps unnecessarily.  Upon discussing the particular point with Mario Lanthier, he said to remember that the webpage in question is merely a summary and not the actual regulation.

In short I, and many others, believe the ‘label is the law’ and that everyone applying pesticides must follow label requirements.  To quote Mr. Woodske, “Will WorkSafe ever take action against a ‘farmer’ that uses the label rather than their (WorkSafe) REI?  It’s unlikely since they won’t want to challenge the PMRA.”

In conclusion, I’m going to continue keeping employees on shift out of treated areas for a minimum of 24 hours.  Golfers will be allowed to enter after the duration of time stated on the label.  Most labels for turf pesticides I’ve researched to this point, have a REI of “when product has dried” but some are longer so read the label!

Of course there are some daily golf course tasks like cutting pins but it’s not overly difficult to keep employees out an “area” for 24 hours and I think it shows two important commitments:

1. We are committed to meeting or exceeding current legislation/regulations; and

2. We are committed to worker safety, which staff will appreciate.

Hopefully this article helps you better understand REI’s however it’s important to remember that this is all subject to change.  Supporting your industry associations will greatly assist with our voice being heard by regulators, if and when proposed changes are announced, and of course we’ll help you stay well-versed on all requirements.

As always, please feel free to contact me directly if you have any questions and all the best as we approach fall preparation.

Some further interesting points about REI’s:

• Different pesticides will have different REIs, since pesticides vary widely in toxicity and hazard.

• Many pesticides have more than one different REI.

• The REI can vary between crops.

• The type of work activity also affects the REI. This is because the amount of human contact with treated foliage varies.

• Only allow workers or other people into treated areas during restricted entry intervals if they use the proper protective clothing.