With unprecedented heat and high winds this past summer came one of western Canada’s worst wildfire seasons on record and at the time of writing (early Sept 2021), hundreds of fires are still burning in BC and AB.

Making international headlines, the town of Lytton, BC which set three consecutive Canadian high temperature records on June 27, 28, 29, topping out at 49.6C (121.3F), burnt to the ground on June 30th (although the exact cause of the fire has yet to be announced).

At about 100km south of Lytton, it got extremely hot here in Hope as well.  How hot was it?  It was so hot that a 20lb bag of snow melt sitting in the corner of the garage started sweating, enough to create a puddle about 8’ long and 1’ wide. That was something I’ve never seen before and was entirely bizarre in my books!

At any rate, as a former golf superintendent in the Kootenays, I experienced a wildfire close call in 2003, the same year 200+ homes in Kelowna were destroyed by the Okanagan Mountain Park fire.  Setting up quick-coupler sprinklers on the property’s perimeter in a last ditch protective effort, along with watching 50+ foot pines on the mountainside ‘candling’, the term used when trees instantly ignite from the bottom up and then explode as sap is superheated, was an unforgettable experience.

As this summer wore on, I wondered and worried about my turf manager colleagues and their teams who were dealing with iminnent wildfire threats, smokey conditions, evacuation alerts and orders.  If you were following the BC Wildfire service on Twitter, it was a full time job keeping up with posts.  Once September rolled around, things started to get under control so I circulated the following questions to see how our industry was impacted.  This story highlights what I heard.

Yes, the Mt Law Fire was very concerning for a while. The day it happened I actually saw a small ball of smoke on my way home from work and within a couple of hours it was confirmed a fire had started just where the connector (highway 97) leaves West Kelowna not too far above Gormans mill. For the next few hours of that afternoon and early evening I watched the fire get larger and larger whilst being glued to various social media updates! All summer I was in denial about having to pack an emergency bag thinking it won't happen to me! By about 8pm I was frantically packing the entire house expecting to hear an evacuation order anytime. It got to about 7pm that evening and the flames were rolling down the mountain towards Glenrosa. As it went dark, I could see multiple emergency service vehicle sirens everywhere and cars streaming out of Glenrosa, it was almost like a scene from a hollywood movie. West kelowna was under a state of emergency but not yet under evacuation alert or order, parts of Glenrosa were under evacuation order. With the Whiterock Lake fire to our north and now the Mt Law wildfire south of us, both heading in our direction it was a worrying time. The fire crews did an incredible job of holding that fire back and preventing it from really getting into Glenrosa. If the winds had been in a different direction, I'm sure it would have been a very different story. Even now, parts of Peachland are very close to the edge of the fire. 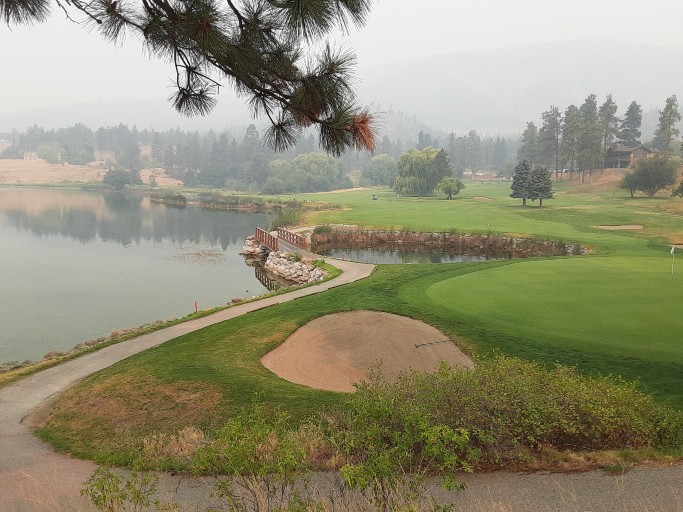 Very likely one of the toughest years of my young superintendent career. All beginning with the horrible heat dome at the end of June, a fire on the connector threatening to take out the 1 and only power line to West Kelowna during the heat dome. Virtually no rain all year long. I know the whole province has suffered in some way or another. This is the first time in my life where I am convinced that our weather has either been affected by global warming or some kind of weather cycle that is causing these horrible conditions. Growing up, being in elementary school in the 80's and being told almost constantly about the ozone layer and global warming, you take it with a pinch of salt, but now, I'm genuinely concerned about our climate. I really hope the world starts taking the latest UN climate report seriously and acting on our problems but, I'm not holding my breath!

I was personally effected and the course and the resort were on modified operations.

The family was evac for 10 days as the fire was within a kilometer from the house. I went away for a few of those days but spent most at home keeping an eye on things. 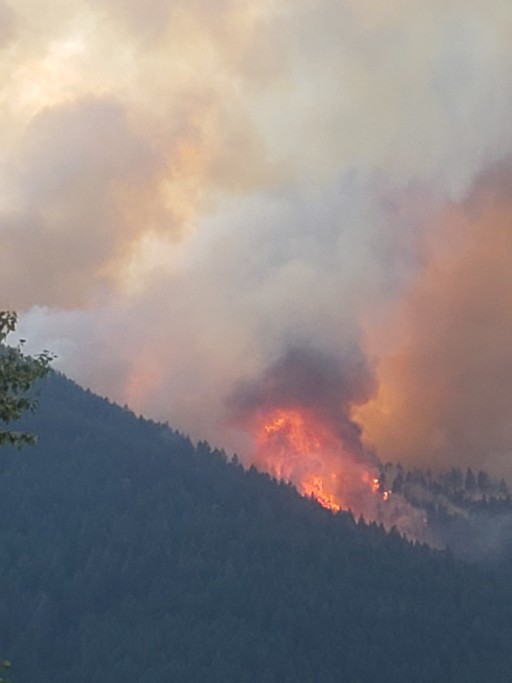 Where there's smoke, there really is fire!  These images of the 1000 hectare Embleton Mountain fire were taken by Keith Lyall just 1km from his residence located 7km from the popular Sun Peaks Resort near Kamloops, BC.

From the resort side the mountain bike/hike closed down completely and the course was open to locals only. The resort was only under an alert but the road up was closed to public.  I modified work hours to 4 hours when the smoke was bad but also supplied N95 masks for those who wanted.  Me, I just lit another smoke and breathed less deep.  Had a few employees get scared and left, one not returning for three weeks.

Overall it wasn’t a big deal, the press and gov’t like to make it seem worse that it really is. The heat dome though, that was freaky, got up to 41°  up here which smashed any previous records.

So we did experience a few days of excitement starting on August 15, 2021.  At around 4pm that day we started to clear the whole golf course of players and staff. By 5:15 it was so dark that it looked like midnight without the moon.  I arrived at 6 pm to make sure that we could turn on all the water for that night just incase the fire made its way to us.  It was about 3km as the bird flies to us.  A road block was set up right outside our gate but I was allowed in for 10 minutes to make any adjustments to the watering schedule.

The next day I spent 13 hours trying to get a permit to access the site to check on all my water pumps.  That effort gave me a 5 minute execution permit to get in, check things and then get out. The following day I spent 9 hours getting permits to allow 6 staff to enter the course the following day to do essential mowing and property checks but by the next morning they let us in without the needed permits but the course stayed closed to the general public till the 19th.

CLICK HERE for a video of a water bomber loading up taken by Jim from his house.

So we were closed for 3 plus days but our round numbers really didn’t get back to normal for an additional week (only the members who play every day still came to play). 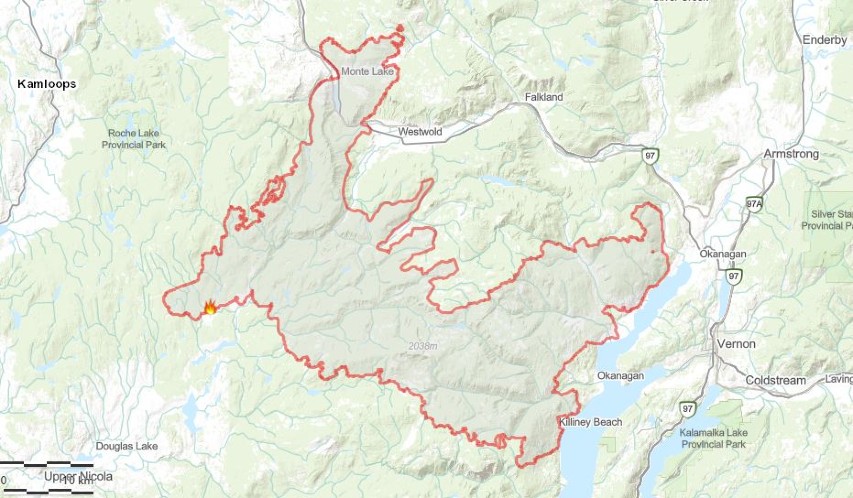 Things are getting back to normal thankfully. Our fire impact was mainly due to the heavy smoke as we were only on evacuation alert and the fires, although close, were not really visible from the golf course.

We had a fair amount of cancellations because of travel restrictions and the heavy smoke but there isn’t much we could do to try to gain new business under the circumstances. August was way down from last year but well ahead of 2020 so still decent revenue-wise.

Things are looking up for the fall so hopefully we end up ahead of last year even with all that has happened.

There's an image for you Jerry. Helicopter taking water out of the pond on the 1st hole at the Pinnacle. Now I am not going to lie and say it is from this year..... I think it was back in 2003. That being said, still a cool image. 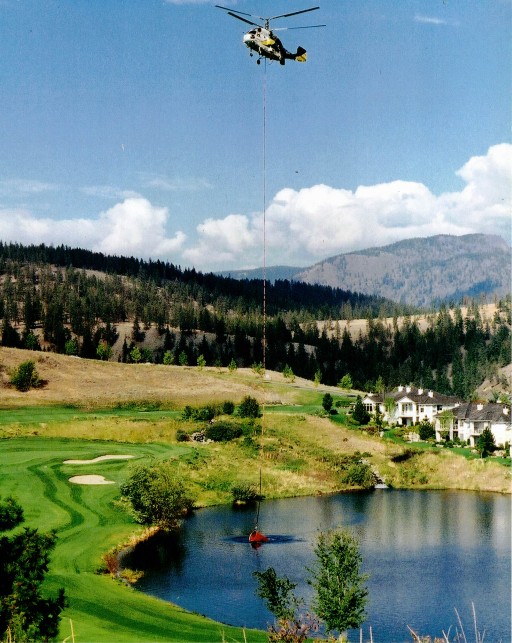 During a wildfire emergency, areial suppression units have the authority to take water wherever they can.  Image courtesy Jesse Cowan.

As we just discussed, we have not had any fires that have directly impacted us at Gallagher's with the exception of being socked in with smoke. I will ask my crew if anyone has taken any pics of the course on those extra smokey days when you almost can't see the green from the tee.

Meadow Creek Golf Course, Logan Lake, BC –
‘We lost 7 days due to an evacuation order.  Closed the course 2 half days due to the heat dome.’

Rob Wilke, Skeena Valley Golf Course, Terrace, Bc
‘We had a lot of smoke a few years ago and what we saw was greener healthier turf.  Heard that from a lot of effected supes.’

Rod MacDonnell, WCTA Life Member
Something to consider during the summer (fire season).  Irrigated healthy turf (with the surrounding tree stands) creates a buffer to the advancement of a wall of fire.  Oxygen, Heat (open flame) and Fuel are frequently referred to as the "Fire Triangle."  I'm sure that if there was more irrigated vegetation around one's property, that the spread of the fire would be reduced or eliminated.

This is an example of removing fuel from the equation:  https://www.youtube.com/watch?v=0ZjCOAnmUaQ

Irrigated turf is very resistant to igniting.  Could this be used as another reason to promote healthy turf stands in our landscapes?