Sport lovers say golfing is safe and deserves to reopen just like playgrounds. 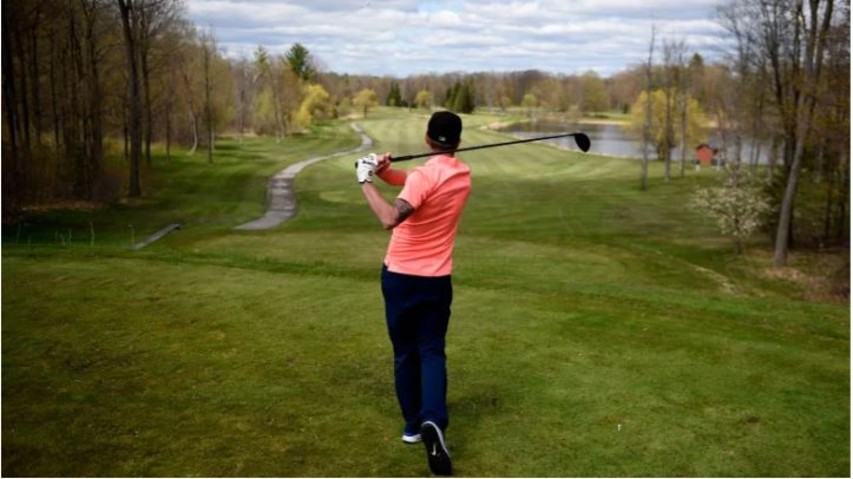 A golfer tees off at the Loch March Golf & Country Club in Ottawa on Saturday, May 16, 2020, during the COVID-19 pandemic. Ontario golfers are calling on the premier to backtrack on golf course closures. (Justin Tang/Canadian Press)

Ontario golfers are swinging mad about being included in the province's enhanced shutdown order and petitions are calling for the premier to backtrack on golf course closures, as he did on playgrounds and some police powers.

Martin Patterson, general manager at Emerald Links, Anderson Links and Cloverdale Links, said right up until the lockdown order, all three courses were open and had full time sheets. All had to be cancelled.

"I can't repeat everything I heard," said Patterson. "People were upset."

Patterson says his golf courses are safe. They've removed the ball washers and rakes, spread out tee times, limited carts to one person, and have stopped taking cash payments.

"Golf is not … causing any issues of social gatherings," said Patterson. "Golf courses aren't the problem."

Instead, he sees golfing as a safe solution to spring fever.

"People can't be cocooned in the house all the time. They have to get out," said Patterson.

'We need to outside and exercise'

Kevin Haime, co-founder of Kevin Haime Golf Centre in Kanata, admits he's no scientist but wants the province to take another look at restrictions on golf courses.

"I think golf is pretty safe," he said.

"We used to be drop by and hit a bucket of balls. Now we're 100 per cent reservation. Each bay is sanitized between users. We have wait stations where the customers have to wait until they're ready," said Haime.

"I don't run a business to take a chance on somebody getting deathly ill."

His viral tweet pointed out that Ontario was an outlier in closing golf courses.

Some replies were supportive, but others claimed that "elitist golf expects special treatment," according to Haime.

"Those are not the people I see at my golf centre. I see John and Jill Public and their kids and their strollers and junior golfers. Golf is really not an elite game."

Not all golfers against the measures

Yagiz Tuna was a member of Carleton University's varsity golf team before the pandemic. The team is not running during COVID-19 so his fourth and final competitive season has been derailed.

Ironically, the fact courses are closed means he can focus on his last set of finals, but he was looking forward to hitting the links upon graduation.

"I'd love to be out there. But at the same time, I understand exactly why they're doing this," said Tuna.

"Many people have been arguing that [golf] is inherently COVID friendly. But … when I'm playing golf with my buddies … I find that I tend to get lazy with certain procedures. Your buddy might chip in and you give him a high five. Or it could be a fist bump after the round," he said.

"If we can keep everything closed for six weeks, and then ... be able to play golf for the rest of the summer? It doesn't seem like a big issue to me."

'A few hours of normalcy'

He wasn't surprised when golf courses were closed.

"Everything's been locked down for so long. How do we open golf, which has the reputation of being a rich man's sport that not very many people play?" said Chinner. "I'm not rich and I'm not white, but I love golf."

COVID-19 has revealed deep inequities, with disproportionate impacts on BIPOC Canadians which Chinner says must be addressed.

"Golf provides people with a few hours of normalcy in a time where nothing is normal," he added.

Mike Kelly, who heads up Golf Ontario, a group that represents some 800 courses across the province, is part of a lobbying effort to get the government to take another look.

"Golf proved that it's safe in 2020. We did it. We proved it," said Kelly. "I believe our efforts will enable us to open back as soon as possible."

CBC contacted the province to see if it is reconsidering golf course closures.

"The enhanced measures we introduced last week are aimed at limiting mobility. Until we get this third wave under control, we need everyone to stay at home as much possible," wrote a spokesperson from the premier's office in an email.