Partnered with Sports Turf Canada and hosted by the City of Kamloops and the Kamloops Golf & Country Club, our first WCTA summer field day since 2019 took place July 26th and 27th in Kamloops, BC.

The field day sizzled, literally with 39 Celsius temperatures both days and figuratively, with a respectable turnout of 55 total delegates, a fantastic day of golf, an excellent and informative speaker in Dr. Gregg Munshaw from the Pinnacle Agriculture Research Centre in Salem, Missouri, and due in large part to our gracious hosts, Travis Olson, Mike DeCicco and Shawn Cook, who were genuinely excited in welcoming fellow turf managers to our Kamloops venues. 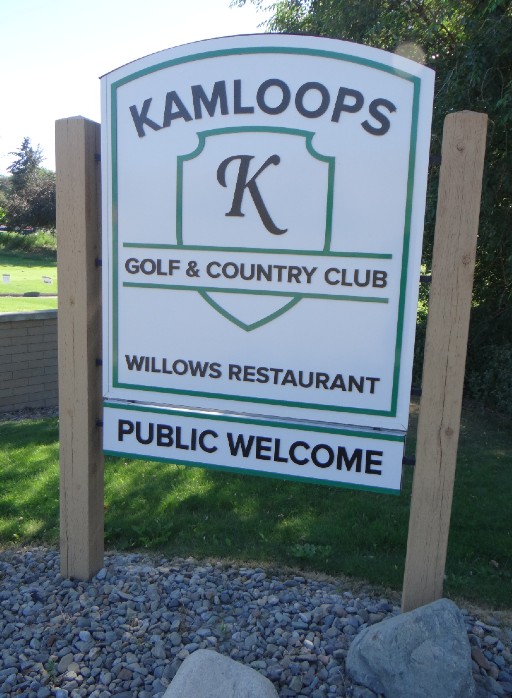 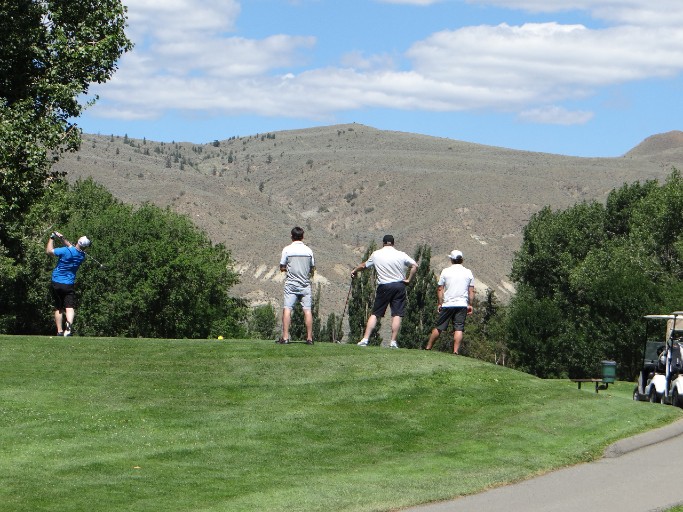 Out of sight - Peter Spindlove launches one against the Okanagan Desert backdrop - way to hold that finish!

The outing at Kamloops G&CC was a lot of fun and the course is pristine – I think they knew we were coming!  Hats off to Travis Olson, Travis Schmidt, Patricia Sloan and the entire turf care department for their efforts and I’m not sure how anyone can keep turf in such great condition for such a sustained period of heat but it may be time to start thinking about growing Bermuda😀. 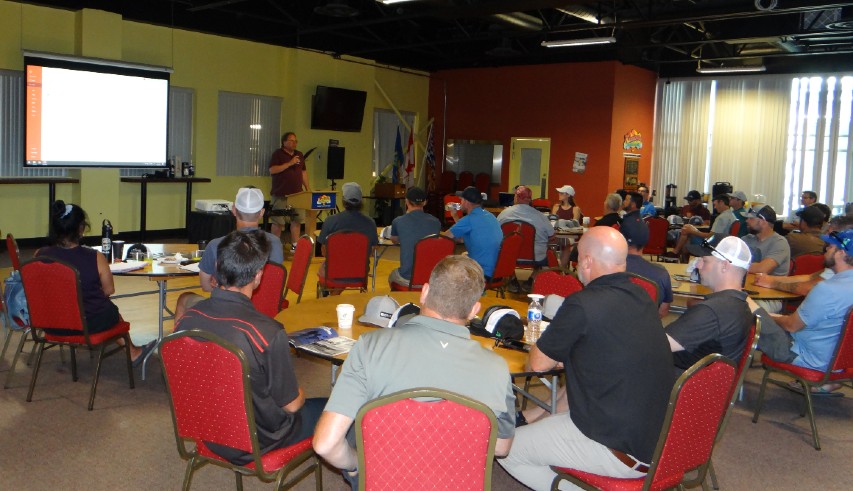 The next morning started with WCTA President, Gary Bartley of UBC Athletics, welcoming and thanking all those in attendance and our hosts for having us.  Shawn Cook from the City of Kamloops provided an interesting history of McArthur Island Park and how the city decided to become the ‘Tournament Capital of Canada’. 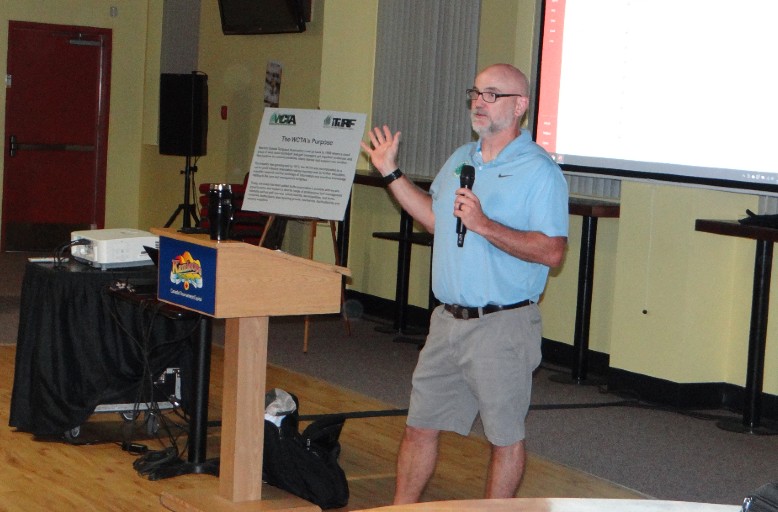 Dr. Gregg Munshaw, Director of Agronomy, Pinnacle Agriculture Research drove all the way from Salem, Missouri with his family, stopping in Kamloops to visit us while on vacation!

Next was Dr. Gregg Munshaw’s presentation titled, ‘Your Best Defence is a Good Offense: Management Practices to Reduce Pesticide Use’.  It was a wide-ranging talk on IPM along with an update on the current seed situation, ie. shortages and price increases, that he predicts will normalize by the coming fall.  I think we’ll keep this Moose Jaw native in mind for future conferences as he’s very sharp and pretty funny to boot!

Getting into the action - turf managers onfield at McArthur Island Park as the city crew fraise mowes a soccer field.

After the talk, Mike DeCicco lead a walking tour of the sportsfields including a fraise mowing demonstration where the group spent quite a bit of time, eventually winding up at Norbrock Stadium, 2018 and 2021 STMA Field of the Year.  The City crew had setup a battery of equipment in the infield for delegates to view while the goose chasing crew had their RC goose-mobiles ripping around the outfield, one of which was turbo-fan powered! 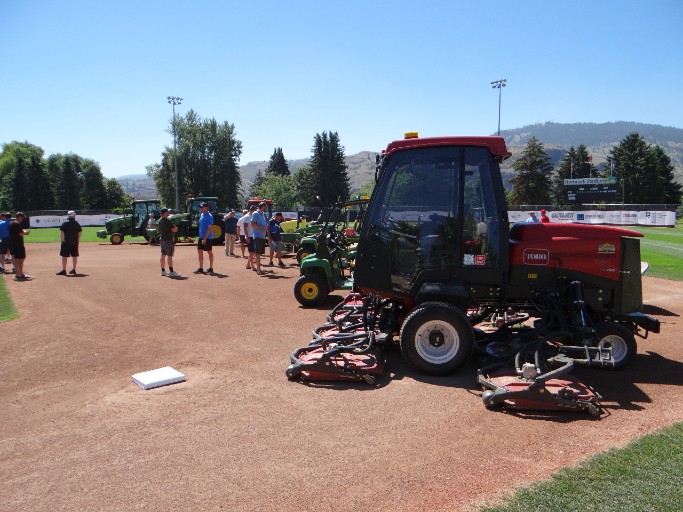 Field Day delegates check out some of the city's equipment at Norbrock Stadium. 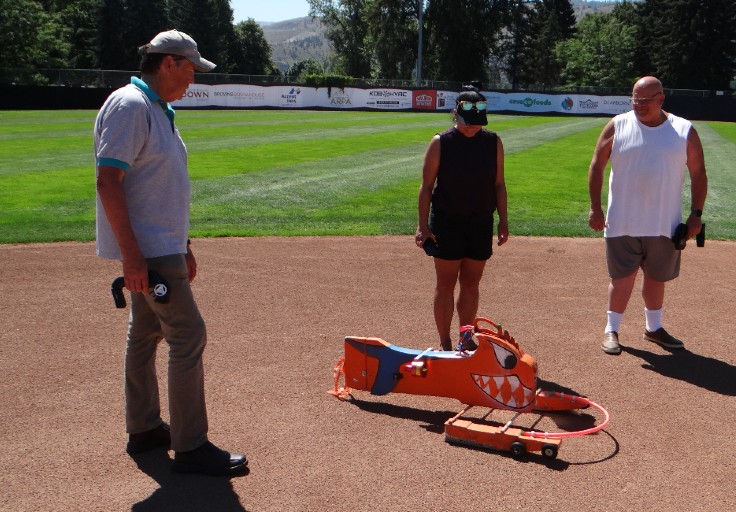 The permanently stationed Kanteen food trailer worked out wonderfully with 5 star service and the best burgers in town.  After a lot of networking, reconnecting and hydrating, the day started to wind down as people headed home while others took the opportunity to tour another exceptional venue north of town called Tournament Capital Ranch. 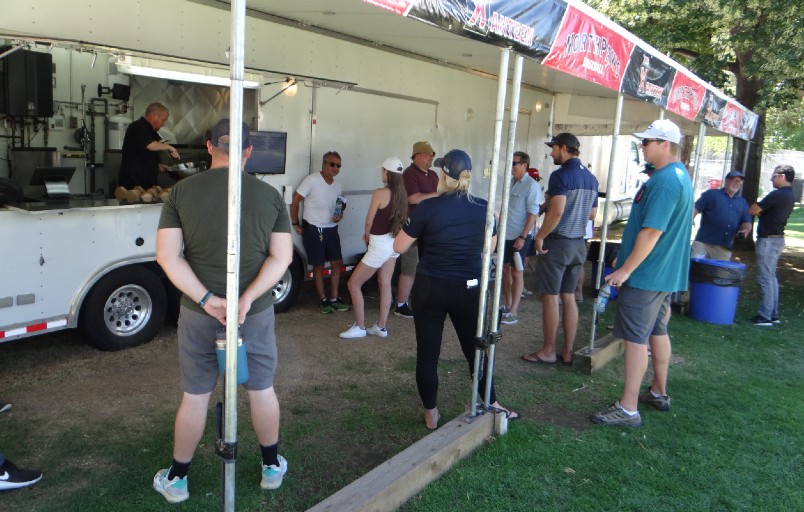 It could have been about 15 degrees cooler but otherwise, things couldn’t have been much better.  It was really nice to hear the buzz of happy chatter throughout the day and once again, see fellow colleagues in person after such a long hiatus.  Thank you so much to our hosts, speaker and everyone who helped put this event together - I look forward to seeing you in person at the River Rock this coming February!