Can There Be a 2021 WCTA Conference and Trade Show? Survey Says…

On August 8th, a brief survey was emailed to WCTA members and circulated again with our August 18 e-newsletter, aimed at soliciting feedback to help Directors make a timely decision whether or not to proceed with production of the upcoming Conference and Trade Show, scheduled to take place February 9-11, 2021, at the Lakeside Resort Hotel in Penticton, BC.

Understanding that Provincial Health Office orders would ultimately dictate restrictions on mass gatherings, the premise was to determine interest in attending if the show was allowed to proceed and also, to gauge appetite for the potential of shifting to online education opportunities if it wasn’t.

Thanks to everyone who completed the survey!  137 responses were received by the August 21st deadline, 48% from the golf sector, 23% from sportsfields, 19% from the supply/service provider side and 10% from ‘others’.  Here’s what the survey says… 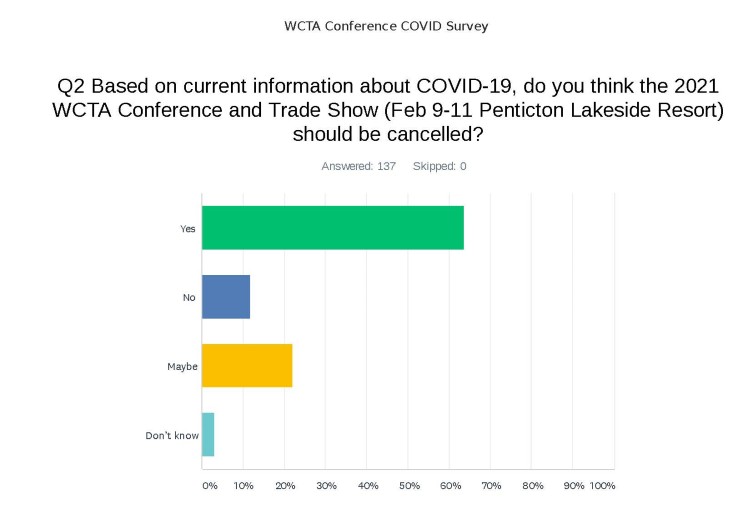 Based on current information about COVID-19, do you think the 2021 WCTA Conference and Trade Show should be cancelled?
With 63.5% of respondents answering yes, 11.7% no, 21.9% maybe and nearly 3% not knowing, clearly the majority felt the show should not go on.  Many comments addressed the uncertainty of the situation and pointed to concern about the potential for coronavirus spread within the setting of a large gathering:

• Too much uncertainty to proceed with a conference that requires a lot of planning and unknown participation during these times.
• No one knows what February will bring at this point.
• Postponed for a later date. Current trends have shown the greatest increase in spread is during large gatherings.
• It depends on any spike in the virus. We would like to attend but we are very concerned.

If our 2021 conference and trade show was allowed to proceed and we went ahead with production, would you attend?
This question more closely addressed the Board’s quandary since again, if PHO gathering restrictions remain in place, it’s the end of the story.  With nearly 33% indicating they would attend, 30.7% saying no, 26.3% maybes and about 10% undecided, it seems like a pretty close split however looking at comments, the yes side was often contingent on the availability of a vaccine or how active the virus was at conference time.

What do you think about a scaled down version of our conference, ie. 1 day?
58.5% of respondents were ‘not a fan’ of this idea with many commenting that it’s a lot of time, travel and money to attend a one day show.  There were also a couple responses that pointed out that the length of the show is not as relevant as ensuring physical distancing and other best practices.

How reliant are you on the conference for obtaining pesticide applicator certificate CEC points?
As an official credit coordinator, the WCTA is obligated to deliver enough education opportunities (with points attached) to ensure applicator members are able to renew their certificates every 5 years.  We also know that CEC point seminars at the annual conference are typically very well attended but that a lot of our members don’t have pesticide applicator certificates so for them, the question is irrelevant.  Nonetheless, insight into just how reliant point collectors are on the show was needed.

43% said they were either fairly or exclusively reliant on the conference for their points with almost 11% stating they were somewhat reliant and about 46% either not reliant or not applicable.

Have you ever attended a live/pre-recorded webinar or similar online presentation?
If yes to question #6, what do you like about webinars?
If no to question #6, why haven’t you attended a webinar?
Does a live, online, interactive, virtual turf industry trade show interest you?
Please estimate your attention span for participating in an online conference and trade show.
As mentioned, this set of questions was meant to gauge member interest in online/virtual education and trade show delivery.  Without question, there has been a massive worldwide shift from in person events and meetings to a variety of different online group communication platforms, some companies and industry associations reacting quicker than others, but the reality was we didn’t know how members felt about this type of learning.

Now we have a pretty good idea!  Almost 70% of respondents have attended a webinar or similar online presentation with 47% attending between 6 and 15 of these.  42% were a little less experienced, indicating they had attended less than 5 webinars while 10% were in the 15+ category.

Granted, that still leaves 30% of respondents who have never participated in online learning and of those, 30% said they liked in-person education and about 38% said they weren’t interested or just haven’t bothered.

On the subject of a virtual trade show, 35% said it would be of interest, 30% said no, 22.6% were maybes and 12.4% said they weren’t sure.  Another close split but many of the comments were positive if not supportive:

• I have troubles picturing what it would look like but I am open to the idea.
• I'm not sure how it would look, but worth investigating
• Could perhaps work if done right
• Wouldn't want it to become the "norm", but in this situation I think it's a good alternative.

Finally, we asked members to estimate their attention span for an online conference and trade show.  Having personally researched 2 dozen+ virtual platforms and participating in many related sales and training webinars over the past 3 months, I can say for sure there is a lot of information that indicates individual sessions can’t be too long and large programs need to be broken up.  Our respondents agreed with 83% confirming that variable timing and 1-2 or 2-4 hours would be the most they could handle.  The most candid comment was????:

• After 2 hours I would want to scratch my eyes out!